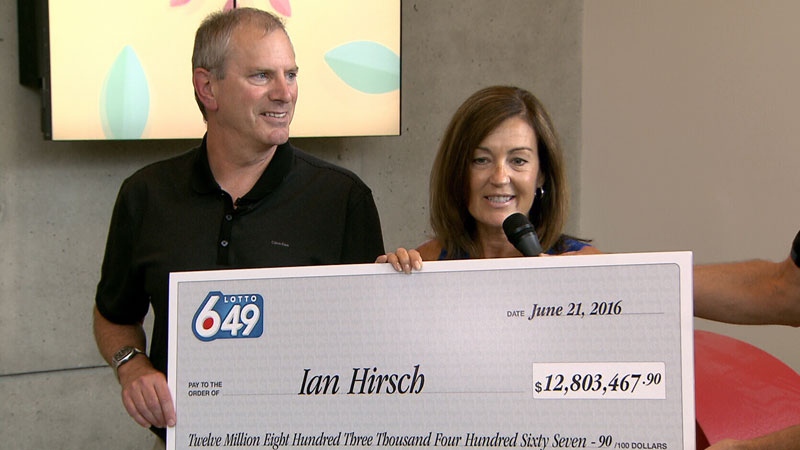 Ian Hirsch holds up a cheque for his lottery winnings on Tuesday, June 21, 2016.

A Coquitlam lotto winner says he plans to spend his millions on a new TV and a house to go around it.

Ian Hirsch is $12.8 million richer after winning Saturday's Lotto 6/49 draw with a ticket he bought in the Lower Mainland.

When the numbers were drawn, Hirsch said he checked his ticket three times in disbelief.

"I checked it online first and then had my wife recheck it. We couldn't believe our eyes so we walked over to the store to check it again," Hirsch said in a statement Tuesday, released after the winner received his cheque.

"It was overwhelming and surreal. I was shaking a lot," he said of the moment his win was confirmed.

He and his wife then made a video call to their children so they could watch their reactions.

"That was priceless," he said.

The new multimillionaire said he plans to spend some of the cash on trips to Europe and Hawaii. He also wants to buy a car, and help out his kids.

But at the top of his list: "I want to buy a gigantic TV, and build a beautiful house around that TV."

Hirsch's win is the second out of Coquitlam this month. His ticket was purchased at a Shoppers Drug Mart on David Avenue. Another winning ticket, worth $1 million, was purchased at a 7-Eleven on the same street ahead of the June 10 draw.