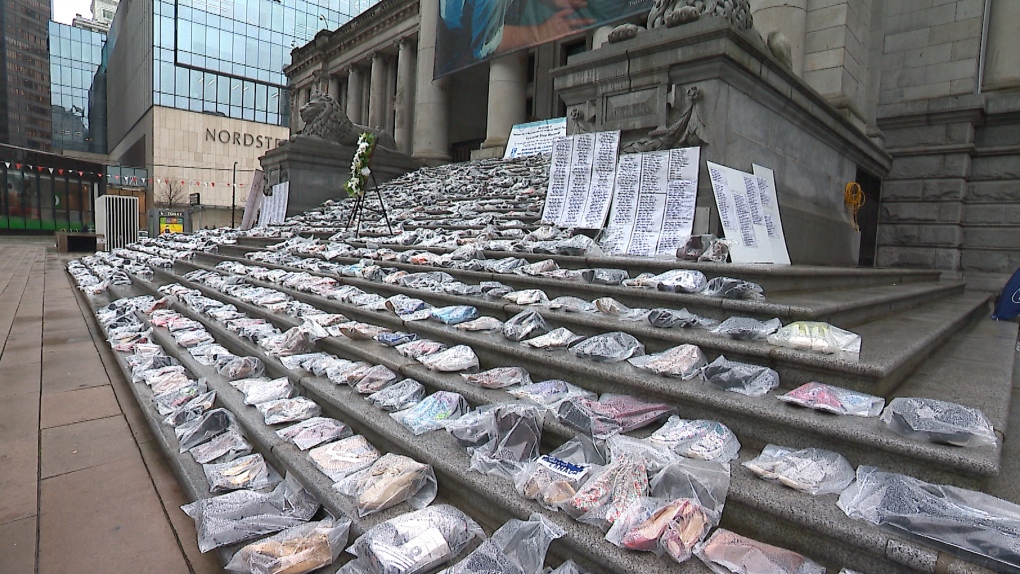 VANCOUVER -- Marking the 30th anniversary of the Montreal Massacre when more than a dozen women were killed at a university, hundreds of shoes lined the Vancouver Art Gallery's steps Friday.

In the evening of Dec. 6, 1989, a gunman entered Montreal's École Polytechnique and killed 14 women in what was called an anti-feminist mass slaying before taking his own life.

"Thirty years ago, 14 young women were gunned down in an act of horrific violence that shocked people in B.C., Canada and around the globe," said a joint statement issued by Premier John Horgan and Mitzi Dean, parliamentary secretary for gender equity.

"On Dec. 6, 1989, these women were full of life, with a bright future ahead of them. Their lives were cut short by a man who walked into a mechanical engineering class at École Polytechnique in Montreal. He segregated the women, claimed feminists had ruined his life and opened fire, killing 14 and wounding many more."

Now, Dec. 6 is also known as the National Day of Remembrance and Action on Violence Against Women and an annual memorial is placed on the steps of the art gallery to recognize women who are killed every year in B.C.

But B.C. Human Rights Commissioner Kasari Govender says violence against women takes many forms in the province, adding that misogyny should be named as the force driving gender-based violence.

"Twice in the last two weeks a Canadian appeal court has had to throw out acquittals in cases that perpetuated long debunked myths about sexual assault complainants," Govender said in a news release.

"Violence committed against these women by the men in their lives was excused or diminished because of what they were wearing or, in the case of a child raped by her stepfather, because a judge decided that she had demonstrated an interest in sex. This way of thinking is abhorrent and discriminatory, and it must end."

Horgan and Dean's statement says B.C. still has a long way to go.

"Every week in our province, there are an estimated 1,000 physical or sexual assaults against women. These assaults are disproportionately targeted at Indigenous women and girls, people of colour, transgender people and those with disabilities," the statement said.

"Today, we ask all British Columbians to join us in remembrance and unite with us to end gender-based violence."

A ceremony took place in Vancouver Friday at 1 p.m. outside the gallery and the names of victims were displayed along with the 1,000 shoes.

Afterwards, the shoes were donated to women's emergency shelters.

In past years, the memorial service has taken place on the Robson Street side of the gallery, but with construction underway for a permanent car-free plaza, this year's service was on the Georgia Street side.

In Victoria, a public vigil was planned for 4:30 p.m. outside the parliament buildings and the Canadian flag was at half-mast from sunrise to sunset.