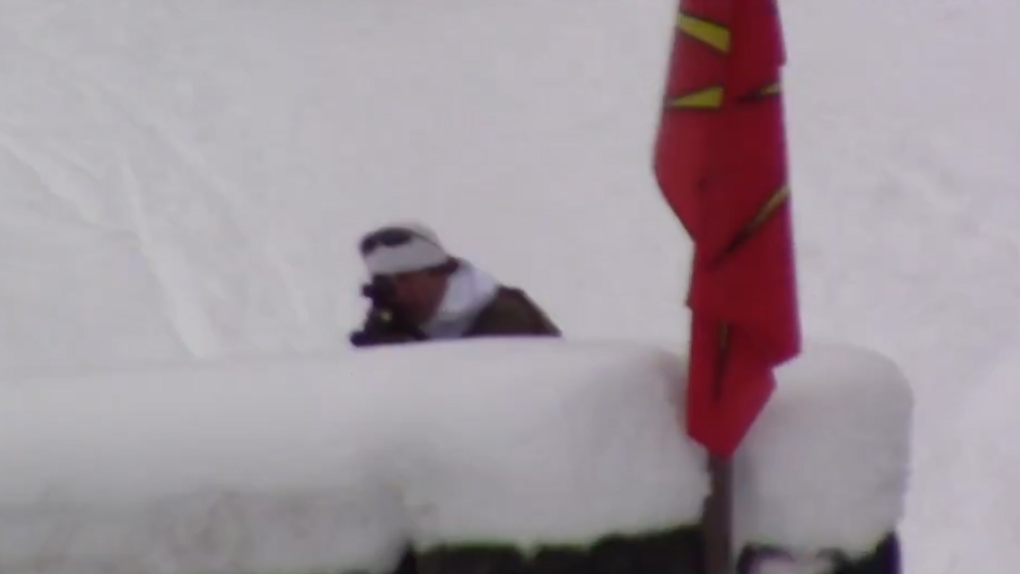 A still from a video posted to Facebook by the Gidimt'en Camp appears to show an officer standing behind a truck on its side while holding a rifle. (Denzel Sutherland-Wilson)

VANCOUVER -- A Gitxsan Nation man says he and fellow demonstrators at a checkpoint on Wet'suwet'en territory were unarmed when an ERT member pointed a rifle in their direction.

Video of the incident, which was edited before being published, was released by the Gidimt'en Camp on Facebook Wednesday. Gitxsan activist Denzel Sutherland-Wilson shot the video while stationed atop a tower during the RCMP enforcement of the interlocutory injunction on Wet'suwet'en land on Feb. 7. The demonstrators had been attempting to stop the construction of a Coastal GasLink pipeline project.

The video shows multiple armed officers on the ground below the demonstrators. The camera then pans over to an ERT member standing behind a truck on its side while holding a rifle.

"He started putting his gun on top of the vehicle and then he just, I don't know. It's kind of hard to even talk about it," said Sutherland-Wilson. "I could see him aiming his gun right at me … for nothing."

Mounties said in an emailed statement that the ERT member used the rifle scope as a "magnified observation device in a manner consistent with police training."

"The ERT member did not point the firearm at any protestor during the operation. The rifle scope has a large objective lens which allows the viewer to observe people or objects without pointing a rifle at anyone," said Mounties.

Sutherland-Wilson said the incident is difficult for him to talk about and that it was the only point during the day where he felt afraid.

"I've never felt anything like having a gun pointed at me before so that was scary," said Sutherland-Wilson. "I'm grateful that nothing happened."

RCMP said that the ERT member had been told prior to the operation that there would be rifles in the protest camp which "could present a threat to police."

Sutherland-Wilson said they did not have weapons, and there were officers closer to his location that could have assessed whether or not there were weapons in the tower.

"We were completely unarmed," he said. "Nothing even resembling a weapon. And I was up on a tower with no place to hide a weapon or anything. And there were already officers around me who were capable of assessing the situation to see I had no weapons there. So I don't really buy their excuse. I think that guy just wanted to point his gun at me and they had the full power to do so."

He said he was eventually arrested that day, along with three other demonstrators, and was charged with civil contempt of court.

"Is that worthy of having a gun pointed at you?" he said about the charge.

ERT members were carrying binoculars but police said the scope allowed the officer to "safely and effectively respond to a threat to the public and police." Police said the member eventually transitioned to binoculars after determining there were no "lethal threats" present.

No one was injured in the incident and police said people taken into custody were arrested with a "minimum amount of force."

Sutherland-Wilson graduated from McGill University in 2018 with a bachelor's degree in anthropology. He said he returned home to B.C. to learn his native language, Gitxsanimx, from his father. He's been at the camp on and off since January 2019 when the first injunction was granted.