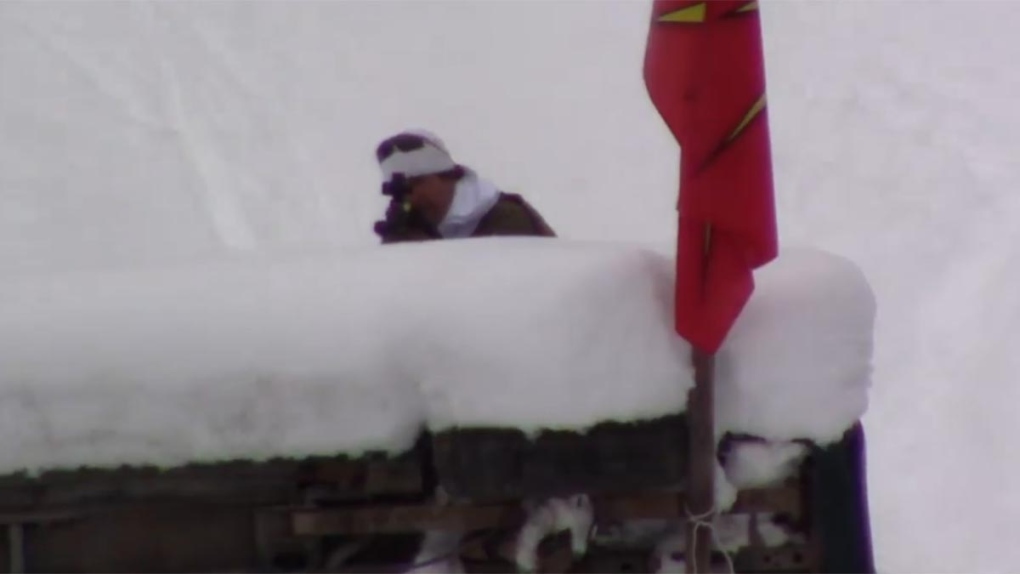 A still from a video posted to Facebook by the Gidimt'en Camp appears to show an officer standing behind a truck on its side while holding a rifle. (Facebook/ Wet'suwet'en Access Point on Gidimt'en Territory)

VANCOUVER -- New video released by Indigenous pipeline opponents in northern B.C. appears to show an officer pointing a rifle in the direction of a Gitxsan Nation man as the RCMP moved in on a checkpoint on Wet'suwet'en territory.

The video, which was edited before being published, was shared by the Gidimt'en Camp on Facebook Wednesday. The group said it was filmed by Gitxsan activist Denzel Sutherland-Wilson, who was stationed atop a tower during the RCMP enforcement of the interlocutory injunction on Wet'suwet'en land on Feb. 7. The protesters had been attempting to stop the construction of a Coastal GasLink pipeline project.

Another demonstrator on the tower, Anne Spice, is overheard saying, "you've got us safely surrounded with all of your weapons, with your automatic weapons. For what? For four Indigenous people trying to protect this land." The camera then pans around to show multiple armed officers below the demonstrators.

The video then shows an ERT member standing behind a truck on its side while holding a rifle. The officer then appears to point the firearm in the direction of the person filming the video.

"They're making the media leave. They don't want them to see us pointing their guns at us. I have nothing. Please take down your weapon. I'm asking you, media can you please get footage of them pointing their gun at me?" Sutherland-Wilson said.

The RCMP said in an emailed statement that the ERT member was using the rifle scope as a "magnified observation device in a manner consistent with police training."

"The ERT member did not point the firearm at any protestor during the operation. The rifle scope has a large objective lens which allows the viewer to observe people or objects without pointing a rifle at anyone," said RCMP.

Mounties said the ERT member had been told prior to the operation that there would be rifles in the protest camp which they believed were used for hunting but "could present a threat to police."

"A male was atop a tower above the bus, below was a female behind a screen of wood, two or three people were seen moving inside the bus, and a male was noted in a tree. Unknown persons were in cabin about 100m away, and it was unknown whether there were any other persons inside structures of the camp area. Police officers cannot simply assume there are not threats in situations such as this," Mounties said.

In the Facebook video, a protester can be heard stating that they aren't armed.

Even though the ERT members were carrying binoculars, police said the scope allowed the officer to "safely and effectively respond to a threat to the public and police."

Mounties said that once the ERT member ensured there were no "lethal threats" present, he transitioned to binoculars.

"This was the most suitable and only piece of equipment to quickly and effectively observe the persons at the scene," said the statement.

No one was injured and the people who were taken into custody were arrested with a "minimum amount of force," according to police.

The video's release comes as a group supporting the Wet'suwet'en hereditary chiefs occupied the B.C. attorney general's office in Vancouver on Thursday. The latest demonstration marks the seventh day of action from the activists opposed to the Coastal GasLink pipeline in northern B.C.