Now in its 29th year, the march takes place every Feb. 14 to honour the lives of missing and murdered women and express compassion for women living on the Downtown Eastside.

"Increasing deaths of many vulnerable women from the DTES still leaves family, friends, loved ones, and community members with an overwhelming sense of grief and loss," the memorial march's website says.

"Indigenous women disproportionately continue to go missing or be murdered with minimal to no action to address these tragedies or the systemic nature of gendered violence, poverty, racism or colonialism." 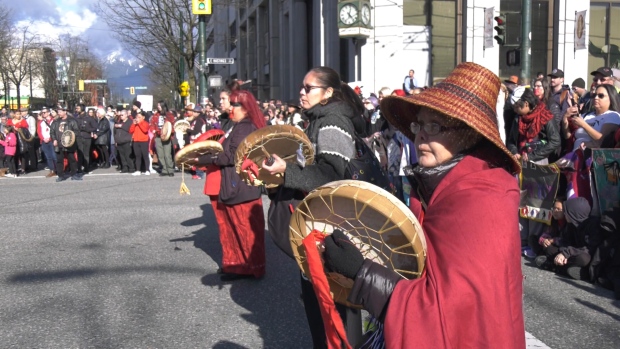 "We need to improve the safety of Indigenous women and girls by addressing and educating people about the underlying causes of systemic violence and racism that lead to their victimization at home, in the workplace and in industry, including addressing the social effects of industrial work camps. Together, we must continue to raise awareness that gender-based violence has no place in our lives."

Some of the ongoing demonstrations in support of Wet'suwet'en hereditary chiefs in northern B.C. are expected to pause for the march. A blockade on the Pitt River Rail Bridge wreaked havoc for West Coast Express commuters Thursday evening and Friday morning, but was torn down so demonstrators could attend the march in Vancouver.

"After a long, nuanced discussion early this morning, we came to a collective decision … to leave the site to be present at the (annual) Women's Memorial March for missing and murdered Indigenous women," said Isabel Karpp with Red Braid Alliance.

Friday's event began with a community gathering at 10:30 a.m. at the Carnegie Community Centre and the march started at noon. A healing circle is expected to take place at Oppenheimer Park at 2:30 p.m. followed by a community feast.

"Today's memorial march includes a private ceremony where friends and family share memories of the women whose lives were stolen," the joint statement issued by the B.C. government said.

"As the march progresses through the Downtown Eastside, stops are made where women or girls were last seen or where they were murdered. These women are not statistics – they are people, who are loved, and whose loss leaves a wound in those they left behind."