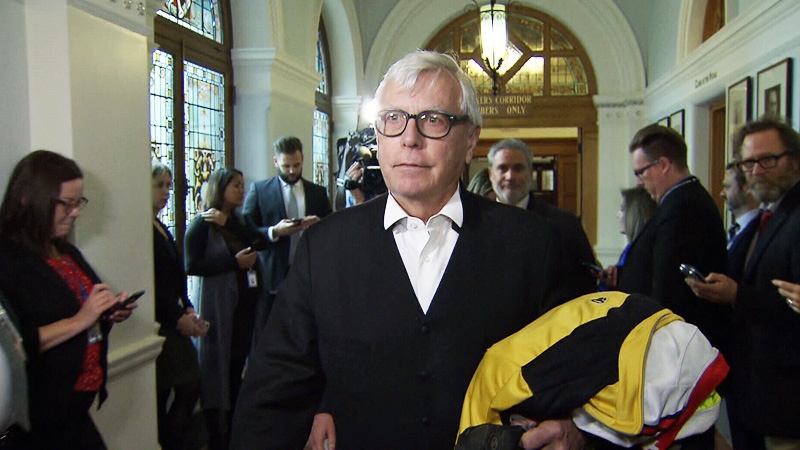 Clerk of the Legislative Assembly Craig James is escorted out of the B.C. Legislature on Tuesday, Nov. 20, 2018.

The Clerk of the B.C. Legislature – suspended during an investigation into his expenses – was travelling much more often to see Liberal party members than the governing NDP – a possible sign of party connection in what’s supposed to be a non-partisan post.

Among other “flagrant” expenses, the Speaker’s report alleges that in those trips Craig James was using “assured loading” on the B.C. Ferries – a $155 a trip perk that added up to almost $11,000 over the period studied with taxpayers footing the bill.

And in most trips detailed in the report, James claims mileage well above the distance calculated by CTV News, suggesting that James was claiming his car was moving when in fact it was sitting still on the ferry deck.

“He didn’t expense visits to me, he did to [former B.C. Liberal Premier] Christy Clark when she wasn’t even a member of this place,” Horgan said at a press conference outside the legislature on Wednesday.

“There are allegations of truckloads of alcohol being delivered to a former member of this legislature. It’s appalling for the people in B.C. We need to get to the bottom of this," Horgan said, adding that "this is a result of years of entitlement and it’s offensive to me, and it’s offensive to British Columbians."

The premier was reacting to claims by the B.C. Liberal leader that the best thing for all parties would be to come together, move on, do an investigation by the auditor general, ban travel for legislature employees and focus on fixing the “petty accounting problems” of the legislature.

“Right now, it’s a real pit. If all of us continue to squirm around in the pit mud wrestling we’re going to look like a pack of idiots. The public need to have confidence in the institution,” Andrew Wilkinson said.

This was the same Andrew Wilkinson who in November accused the B.C. Speaker of being “out of control” and “building his own little empire.”

That was before the report came out, with allegations of tens of thousands of dollars of personal travel expenses, thousands of dollars on suits with the justification they were somehow “part of the uniform” of a legislature clerk, a wood splitter, and a $257,000 retirement settlement for James, even though that program was supposedly discontinued in the late 1980s.

Both James and Lenz have denied wrongdoing, and didn’t respond to inquiries through a lawyer or spokesperson. An RCMP investigation is underway, with two special prosecutors appointed.

Of the 36 trips James billed for, 25 of them were to see Liberals including Geoff Plant, Bill Barisoff and Christy Clark. Eleven were for some other purpose, two were to see members of both parties and just one to see an NDP MLA.

“Mr. Plant is a practicing lawyer in Vancouver, and I understand he was retained by the legislature to provide legal advice,” Wilkinson said, adding that he’s not sure about the other trips.

James used “assured loading” enough to bill taxpayers $10,975, and claimed mileage “that exceed what would be expected given the indicated destination,” the report says.

Plecas says the sergeant-at-arms “expressed the view that Mr. James was not impartial and that he was in fact very close with the B.C. Liberal Party.”

Elsewhere, Plecas highlights the “unusual” appointment of James as Acting Chief Electoral officer in 2010, before he gave several favourable rules to the then-governing Liberals. He was then appointed clerk in 2011.

“Statements made in the House by Members of the Official Opposition indicate that they considered the decision to be rushed, and questioned why the appointment was not subject to a competition,” the report said.

“It is essential that the Clerk of the House is and is seen to be a non-partisan role… This preliminary report cannot, and does not purport to, draw conclusions as to whether Mr. James is partisan. However, it is undoubtedly the case that he is seen to be by some people, and appearances are important.”

Horgan said he believes that the Speaker’s report has provided a moment to seize and improve the Legislature.

“To the people of B.C., I’d say we are on top of this. The independence of the Speaker’s office may well be the best thing that’s happened in the last 18 months,” he said.