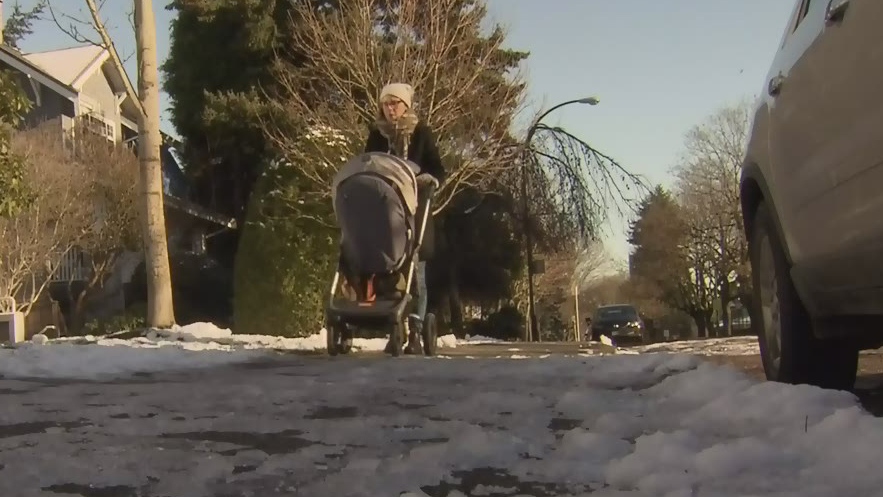 VANCOUVER - Ahead of snow shovelling season, the City of Vancouver is considering reviewing its removal inspections and enforcement program.

Right now, city bylaws state that owners or renters must remove snow or ice on nearby sidewalks by 10 a.m. or face the risk of a fine. But how that's inspected may soon change as the city has put out a bid for consultants to review current enforcement.

A request for quotes has been posted on B.C. bids and if approved, that review could include taking a look at current inspection methods, enforcement, penalties and how information about that entire system is distributed to the public. The deadline for quotes is Oct. 31.

Currently Vancouver issues two "soft notices" before issuing a ticket. In the 2016-2017 winter season – which saw a cold snap the length of which the city says it generally only sees once every 30 years – over 9,266 tickets were issued. That figure was an 412 per cent higher than the 10-year average.

That year, the city said its "soft notices" helped people comply with bylaws in 80 to 85 per cent of requests that were made.

But for some residents, snow removal can be challenging. For that, the city hosts a "snow angel" program, where volunteers can assist seniors and people with limited mobility remove snow and ice from their sidewalks and avoid those fines.

However even before winter sets in, home owners should be aware they aren't just asked to clear snow and ice from their sidewalks. In the fall, while city crews clean streets of fallen leaves, they do not clear sidewalks. Residents are reminded to not rake or blow leaves onto the street, sidewalk, bike lanes or into a catch basins, as it could cause flooding or be a safety hazard. It could also result in a fine up to a whopping $10,000.