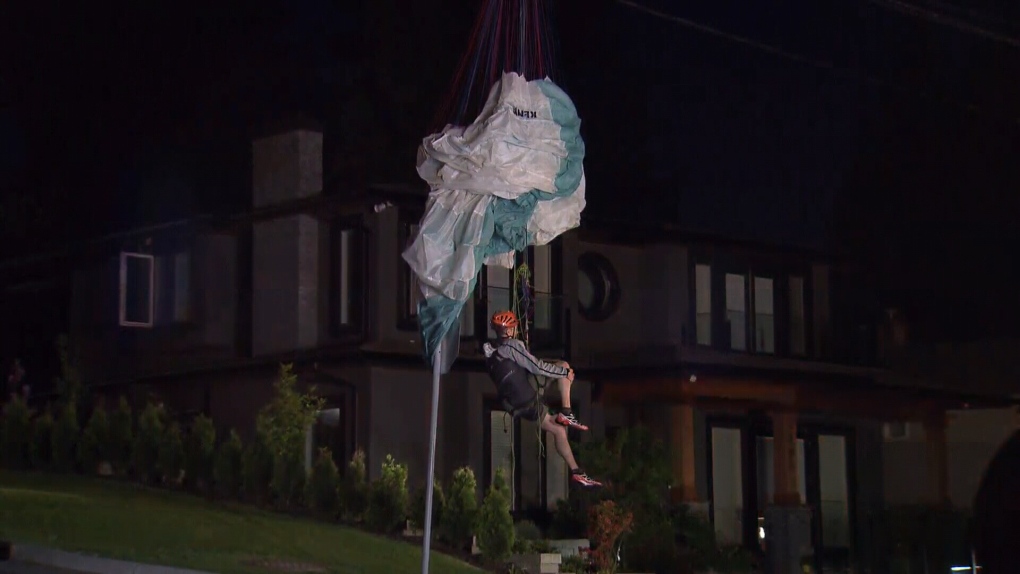 It was a close call for a paraglider in North Vancouver after he found himself tangled in power lines. (CTV)

Transport Canada is investigating after a paraglider intentionally crashed into some powerlines in North Vancouver earlier this week.

The national agency will "take appropriate action" if the glider or pilot did not comply with the rules, Transport Canada Regional Communications Officer Sara Johnson said in a statement to CTV News.

The regulations include that hang gliders and paragliders are prohibited from flying at night and that gliders can't operate in controlled airspace.

"While there are no regulatory requirements for pilots to hold a licence or permit to operate their aircraft, there is a requirement to successfully complete a written examination before piloting hang gliders and paragliders in controlled airspace," she added.

Johnson said that hang gliding operators who want to use an ultralight plane to tow a hang glider are required to notify Transport Canada. She did not say which rules, if any, Transport Canada's investigation will focus on.

The man in his 50s said he'd been flying for decades, and decided to crash into the Canyon Heights powerlines on Tuesday to avoid landing on parked cars.

He was uninjured, but the tactic left him tangled in the lines for more than an hour while he waited for firefighters to help him down.

As a result of the crash, thousands of area residents were without power for an hour.