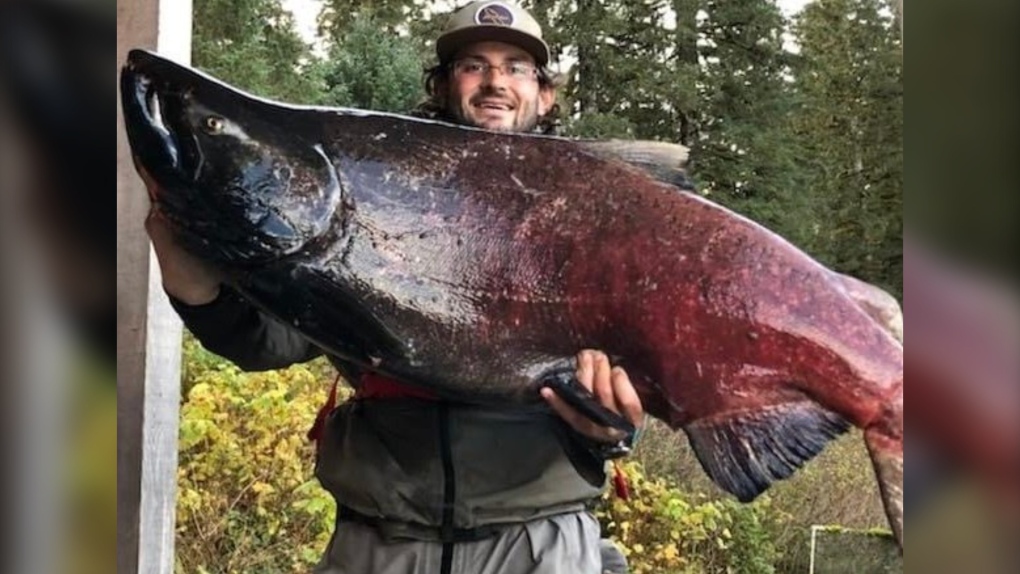 It appears one B.C. hatchery program is off to a promising start, by the size of the Chinook salmon they’ve been pulling in from the Wannock River near Bella Bella (Percy Walkus Hatchery).
VANCOUVER -

“They can get up to 100 pounds, even potentially larger,” Owen Bird, executive director of the Sport Fishing Institute of B.C. told CTV News Vancouver in a phone interview.

He says salmon this large only come from one of two rivers in B.C., the Wannock River and the Kitsumkalum River in Terrace. Both rivers are supported by hatchery programs to help build strong salmon stocks.

The Percy Walkus Hatchery has been catching some of these big Chinook as part of its “egg take” program, where volunteers capture salmon that are preparing to spawn in the Wannock River.

“They collect a number of returning Chinook this time of year by using nets, then harvest the eggs and sperm and use that for stock enhancement,” says Bird.

He says they then get put into a hatchery system that has been built by the river’s edge.

“They see those Fry through until they can be released into the ocean,” added Bird. “It’s just helping nature along.”

Bird credits the success of the salmon to the work done by the Percy Walkus Hatchery, which has been running since 2016.

“Aiding these big Chinook is a really great project,” Bird says. “It’s an important part of the fate of the salmon along the coast.”

Sid Keay, the owner of Duncanby Lodge, has partnered with the Percy Walkus Hatchery to help fund its hatchery programs.

Keay says there used to be dozens of rivers that were home to these “monstrous” fish in the region, but now it’s dwindled down to just two.

“Ninety per cent of all the fish over 40 pounds come from the Wannock River and the Kitsumkalum River,” he added. “Once the genes are gone, they’re gone. That’s why our hatchery program is so vital.”

But he says, one of the greatest challenges for these large salmon is that they come from smaller river systems like the Wannock River, as opposed to the Fraser River.

'Bitcoin widow' sounds off on accusations, the missing millions and her new book

Jennifer Robertson, the widow of QuadrigaCX CEO Gerald Cotten, is speaking out about persistent allegations that her husband is still alive, investors’ missing millions and the new book she’s written to set the record straight.

For the first time, scientists have successfully transplanted a genetically modified pig kidney into the body of a brain-dead human, an important step toward animal organs potentially becoming viable for transplants to save human lives in the future, something that could help address organ shortages worldwide.

Russia accused the West on Thursday of plotting 'provocations' in Ukraine and disguising its alleged intentions by fomenting concerns about Moscow planning aggressive military action in the neighbouring country.

A Pakistani court sentenced a Muslim woman to death after finding her guilty of blasphemy for insulting Islam's Prophet Muhammad in text messages she sent to a friend, an official said Thursday.