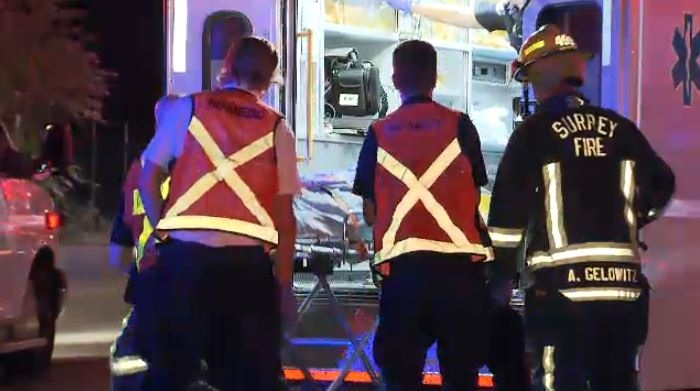 A 19-year-old woman is taken to hospital, after falling under a slow-moving train.

A 19-year-old Surrey woman has lost her arm after an accident involving a train early Saturday.

RCMP says the woman was with a group of people, who tried to jump onto a slow-moving train near the intersection of Old Yale Road and Timberland Road at about 12:30 a.m.

“They were attempting to get on the train, when it was slowed down, and one fell and went under the train and had an injury to her arm,” said Insp. John Brewer of the Lower Mainland District RCMP.

“It looks like now we’ve had an amputation of that arm,” he said. “The injured person has been rushed to hospital.”

He said the group had been drinking earlier in the night, and the accident happened away from any train crossings.

“We don’t want anybody to try to fool around or try to attempt to get on a train while it’s moving, or at any time when it’s on the tracks,” Insp. Brewer said.