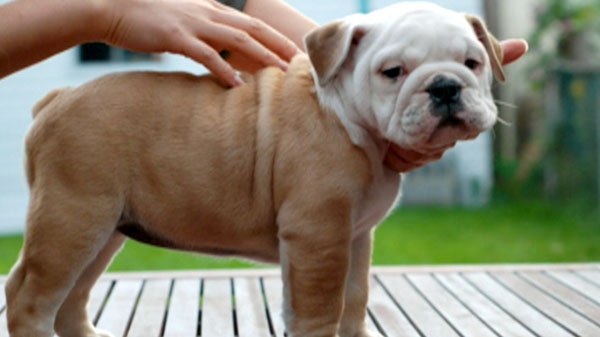 One of the stolen English bulldog puppies is seen in this undated photo.

A Richmond, B.C., pet store owner is vowing to fight the city's decision to become Canada's first municipality to ban the sale of puppies at retail outlets, calling the move unfair and unreasonable.

Ernest Ang, who owns a Pet Paradise franchise in Richmond, told ctvbc.ca that the decision is discriminatory and that his business does not buy its animals from puppy mills.

"We will fight. I have nothing to hide," he said.

Ang, who has sold puppies for 30 years from his retail outlet, says his animals are all imported from USDA licensed distribution facilities in the U.S. and has always adhered to strict import regulations.

"If one of the animals is found sick at the border the whole shipment is turned away. We are 100 per cent transparent," he said.

The bylaw will undergo a formal reading next week. If all goes according to plan, Richmond pet store owners will have until April 2011 to sell or remove all their puppies.

Ang estimates he will lose 50 per cent of his business once the bylaw takes effect. He wants to see kennels and so-called puppy breeders in B.C. licensed and inspected so the province can eliminate puppy mills.

"I wish they would come to my store and understand what we're doing instead of accusing us of something we don't actually do," Ang said.

But advocates argue that taking away the opportunity to impulse buy animals will force the general public to visit a kennel to see what conditions are like and, with any luck, make more responsible decisions.

"There's no way people – animal lovers -- would buy the animals from that kind of facility, a puppy mill. But when you see an animal in a storefront there's no full disclosure and that's a big problem," Coun. Evelina Halsey-Brandt told ctvbc.ca.

"Many still conduct themselves in a manner we are uncomfortable with. We can't do inspections there," she said.

The city will have a consultation period of several months for people to come forward with their thoughts and concerns about the ban.

A victory for animal rights

"This is truly the way of the future."

The SPCA sees the ban as a new business opportunity for pet stores, not just a loss of revenue.

"The one time purchase of a $1,000 dog is just one opportunity. A pet store could use this time to feature great breeders in their area. It just takes a bit of creativity and integrity," she said.

Halsey-Brandt suggests store owners could show pictures of puppies from reputable facilities and institute a commission or finder's fee with the operator.

"You can have a very viable and relevant business including the humane treatment of animals," she said. "None of us are trying to put anyone out of business."

Moriarty admits the ban won't immediately solve the problem of puppy mills in B.C. but says it's a strong statement.

"If someone in Richmond wants a puppy they'll have to drive somewhere else and it can be just those few moments of clarity to stop someone from impulse buying an animal."