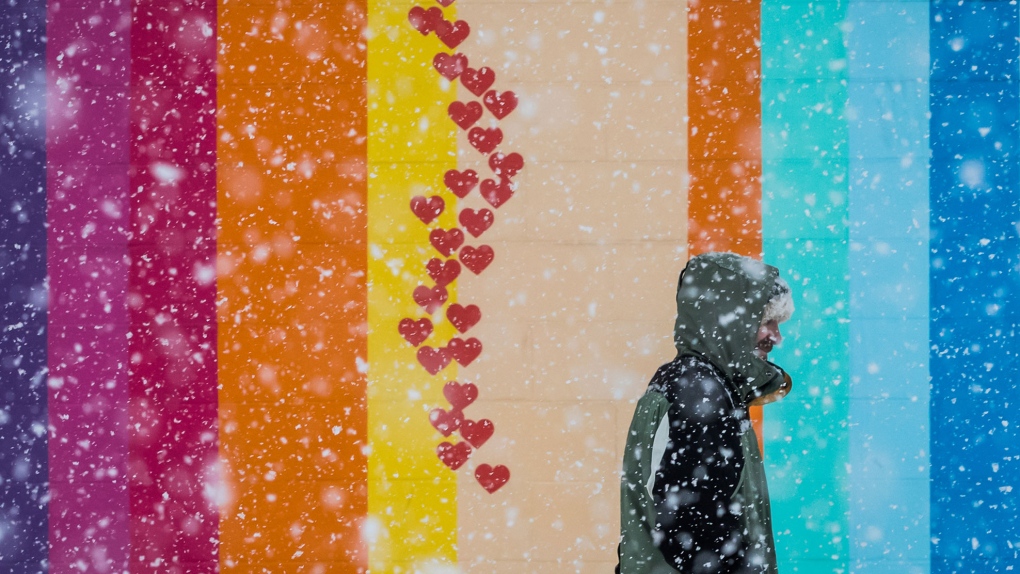 A man stands outside a brightly painted building as heavy snow falls in Vancouver, on Sunday Feb. 10, 2019. (Darryl Dyck / THE CANADIAN PRESS)

Some snow is likely on the way for parts of B.C. this weekend according to the latest forecasts from Environment Canada.

As of Friday, the government agency predicts that parts of Metro Vancouver and the Fraser Valley, including Abbotsford, could see some flurries starting Friday night into Saturday morning.

A special weather statement is in effect for the areas, which calls for wet snow with the chance of snowfall amounts reaching five centimetres.

However, areas closer to the waterfront in Metro Vancouver likely not see much snow accumulating, and temperatures during the day are expected to remain above zero.

ONCE-FLOODED AREAS TO SEE THE MOST SNOW

In some of the other areas hit hard by recent flooding and rainfall, there is more significant snowfallon the way.

The forecast said that due to the trajectory of the low pressure system, areas to the south and east, such as near Chilliwack, could see a greater chance of higher snowfall.

A snowfall warning also came into effect Friday for areas along the Coquihalla Highway, including Hope and Merritt, where the roadway is currently closed.

Snow is forecastto fall along Highway 3 starting Friday night into Saturday morning. As much as 15 centimetres of snow is expected to accumulate in some parts.

The snow is expected to taper off in those areas Saturday afternoon however, transitioning to a few flurries and mixing with rain by the evening hours.

Andrew Giles, B.C.’s manager of river forecast and flood safety, said during a news conference Friday that the cooler temperatures are already helping to reduce the “inflow” to some of the impacted river systems.

“The sustained freezing temperatures in the Interior of B.C. will help to reduce the water levels in the Fraser which will help water to be drained more quickly from the Sumas Prairie,” Giles explained.

Over in Penticton, which saw record-breaking heat earlier this week, temperatures will still remain over zero during the daytime hours, but snow warnings do remain in effect with snowfall amounts expected to be around two to four centimetresovernight Friday into Saturday.

ANOTHER SYSTEM ON THE WAY

Environment Canada officials said during the Friday news conference that another system is expected to hit much of Vancouver on Monday.

“Another system is sliding down the coast, we’re now into a north westerly flow, so snow is also likely and perhaps even down to sea level,” said warning preparedness meteorologist Armel Castellan.