SkyTrain strike: What you need to know, and how to get around

VANCOUVER -- Dec. 10 update: The strike was called off and a tentative deal has been reached. Developing story here.

Negotiations are underway between SkyTrain workers and their employer, but trains will come to a halt this week if a last-minute deal isn't reached.

Ahead of the incoming job action, here's a quick look at what Metro Vancouver transit users need to know about the SkyTrain strike.

When is the strike?

SkyTrains will be held Tuesday, Dec. 10 to Thursday, Dec. 12 if a deal isn't reached in the coming days, the union says.

For now, the plan is for service to resume Friday, Dec. 13. No further plans for job action have been announced so far.

Which lines are affected? Which will still be running?

The strike impacts the Millennium Line and the Expo Line.

The Canada Line and West Coast Express will be operating as usual.

What other options are there?

Buses and SeaBuses will be operating through the strike. However, Coast Mountain Bus Company warned Monday that bus service will not be increased during the strike "given our operational constraints and labour considerations."

Transit users planning to take the bus during the strike should expect buses to be busier than usual on days where the SkyTrain is down.

During the threat of a bus strike last month, TransLink recommended using its Trip Planner tool to figure out an alternate way of getting around.

The online tool has fields for "from" and "to" addresses, and gives users the option to select their departure or arrival time under the "Settings" button.

In TransLink's new Trip Planning app, users can choose to sort results by trip time, walking distance, number of transfers, accessibility and whether a bike rack is available.

During the strike, users should select "Exclude SkyTrain," an option at the bottom of the pop-up.

To leave it out, choose "Bus" under the "Prefer" drop down menu. 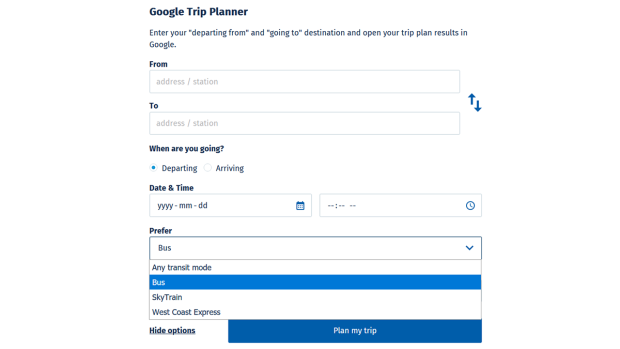 Car-sharing vehicles will be available as usual, though they may be harder to find if demand is increased.

Anyone driving their own vehicle or part of the car-share fleet should expect an increase in traffic, and to plan for a longer commute. Parking may also be harder to find, depending on how many choose to drive in to work.

Cyclists can continue to use Vancouver's 300-plus kilometres of bike paths, but should be warned that the forecast is calling for rain most of the week.

How do I keep up to date?

CTVNewsVancouver.ca will be covering the negotiations and strike actions as things develop.

In addition to alerting the media, TransLink says it will update its Buzzer Blog with the latest on job action and talks.

Transit users can sign up for alerts specific to the routes they use by filling out a form on TransLink's website. Once enrolled, they'll receive a text message and/or email any time their route is impacted.

CUPE 7000 represents 900 workers employed by the B.C. Rapid Transit Company, including attendants and control operators. Also among those 900 people are administration, maintenance and technical staff.

Workers have been without a contract since Aug. 31, and have had more than 40 negotiation sessions since May.

Talks broke down in mid-November, with the union listing key issues as fair wages, sick days, staffing levels and overtime.

The union voted in favour of job action about a week later, but returned to the bargaining table on Nov. 23.

Since then, they've been unable to reach a deal, and issued a 72-hour strike notice Friday. On Saturday, they announced the dates of the train stoppage.

TransLink estimates that about 150,000 Metro Vancouver residents rely on the SkyTrain every weekday to get around.