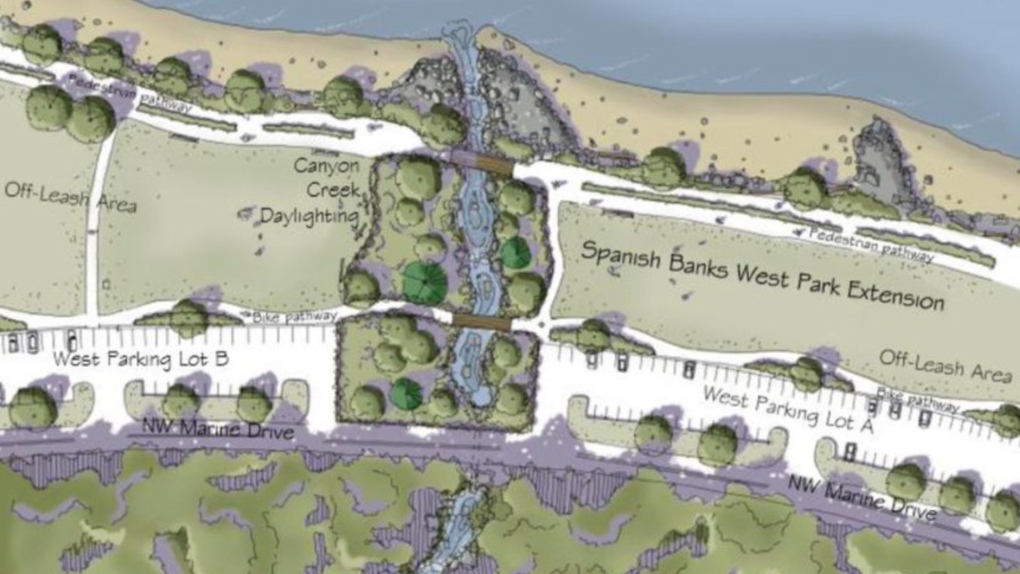 The Park Board is set to vote on whether to move forward with a project that could see the restoration of a stream near Spanish Banks beach.

A report recommending the restoration of Canyon Creek says the project would mean changes to the city’s third largest off-leash dog area and the removal of nearly three-dozen nearby parking spaces.

The creek is currently covered by a swampy grass field but could soon see the light of day, provided that all stakeholders, including the Musqueam, Squamish and Tsleil-Waututh First Nations, and the province, agree on how to do it. Public consultations would also be required.

Dave Demers, Green Party park board commissioner took to Twitter in support of the project and called it a “rare opportunity.”

Restoring the stream would include replanting native plants in order to create new habitat for birds, aquatic animals and pollinator species, according to a new report prepared by Francisca Olaya, an environmental planner for the city.

“The general concept and goal would daylight the creek to be similar to a stream in as natural state as possible,” it reads.

“The opportunities to daylight streams in Parks are relatively few in the City,” it continues.

But restoring the creek would affect the dog park, parking availability and the bike path, and therefore  "comprehensive public engagement" would be needed.

Since the creek currently flows under an area of the off leash dog area, the newly restored creek habitat would be at risk of being damaged by adventurous dogs. Therefore, the report recommends fencing off the creek area. Doing so would reduce the off leash area by about four per cent.

The report also says that daylighting the creek could result in the loss of about 35 of the existing 266 parking stalls that are spread out over several lots, reducing parking spaces by 13 per cent.

The nearby bike path would also need to be diverted, which would solve a current problem of the bike path and pedestrian path being too close together, according to the report.

“The gravel pedestrian and bike paths through the off-leash area run parallel to each other close to the beach,” it reads.

“The existing paths running between the open grass area of the off-leash area and the beach area are currently a conflict zone for cyclists, pedestrians and off leash (dogs).”

There’s also the potential that salmon could eventually use the stream. Spanish Banks Creek, roughly 400 metres east of Canyon Creek, was restored in the late 1990s. The project was finished in 1999, and by November 2000, Coho salmon had returned to the stream after 50 years of absence, according to Park Board documents.