RCMP respond to 2nd shooting in Merritt, B.C., in 4 days, 'strongly believe' it's connected to 1st

RCMP respond to 2nd shooting in Merritt, B.C., in 4 days, 'strongly believe' it's connected to 1st

Mounties in Merritt, B.C., say they "strongly believe" shots fired in the city early Friday morning are connected to the incidents that saw up to 100 rounds discharged there earlier this week.

The city’s school district took to Twitter Friday morning to alert the public that RCMP were aware of a targeted incident.

“We have been advised that schools are not connected and can remain open. If a family is impacted directly, please take direction from RCMP,” reads the tweet by school district 58.

Shortly after, RCMP informed CTV News that they believed the public was not at risk.

In a statement, Merritt RCMP said they were called to the 2100 block of Priest Avenue in the early hours of the morning for a shooting they believe was targeted.

"The callers identified a distinctive, mid-90s grey Dodge Ram pickup with a maroon box in the area at the time of the shooting," police said in their release.

"The truck then fled the scene at a high rate of speed."

Shortly after the shooting was reported, a vehicle matching the truck's description was reported on fire near the Highway 5 and Highway 5A on-ramp, police said, adding that the area is known as the Goedy Creek pit.

The truck was later determined to have been stolen around 5:30 a.m., and police believe it was stolen solely for the purpose of the shooting.

Burning vehicles are a common sight after targeted shootings in the Lower Mainland.

"We strongly believe that this incident is associated to the ongoing investigation into the shooting that occurred earlier this week," said Merritt RCMP acting commander Sgt. Josh Roda, in the release.

On Wednesday, Roda told CTV News Vancouver police had identified a group of suspects they believe were responsible for the Tuesday-morning shootings that rocked the city and surrounding communities.

No arrests had been made at that time, however, and the investigation remained ongoing.

There were no reported injuries in Tuesday's incidents, which involved shots fired at three different locations – on the Coldwater Indian Band reserve, at a mobile home park in Merritt and on the reserve of the Lower Nicola Indian Band.

No injuries were reported in Friday's incident, either, according to RCMP.

"Investigators are continuing their tireless efforts to identify and apprehend the suspects in these brazen events," Roda said in the statement.

Mounties are asking local businesses and residents to review any surveillance video they have that may have captured video of the truck Friday morning.

They're specifically interested in video from the following locations: 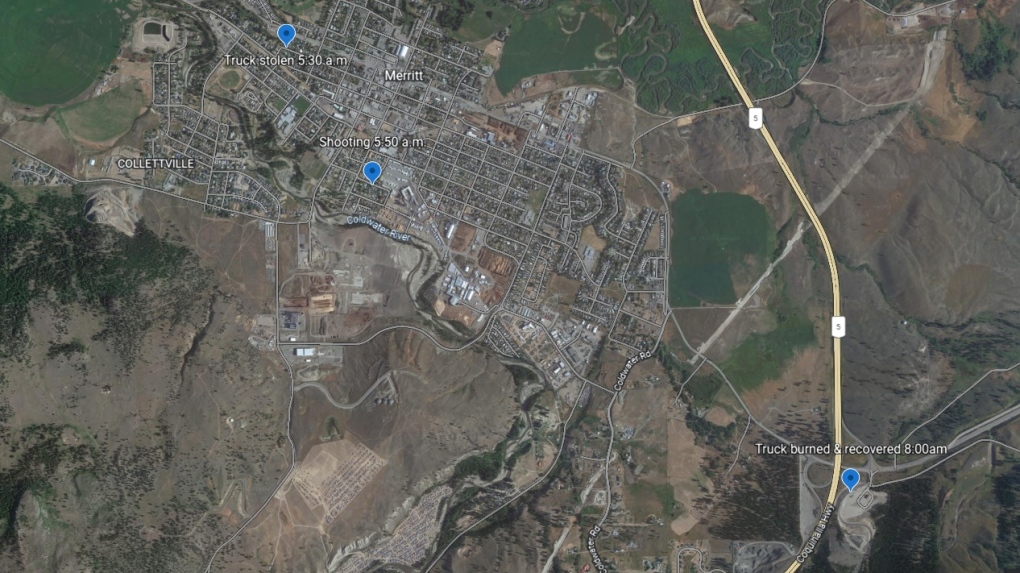 RCMP provided this map of the locations related to Friday morning's shooting. (CTV)

Police are also asking anyone who recognizes the truck or has any information about the recent shooting incidents to contact them at 250-378-4262.

Two children wedged between concrete in the remains of their home in northern Syria have been rescued more than 36 hours after Monday's quake trapped their family as they slept.

Like many other Turkish-Canadians Nural Sumbultepe is grieving the family members she lost in the earthquakes from thousands of miles away, and trying to find the best way to support the survivors and relief efforts.

An annual survey on how trusting Canadians are suggests their faith in governments is rebounding as the COVID-19 pandemic begins to fade.

North Korean leader Kim Jong Un and his young daughter took centre stage at a huge military parade, fuelling speculation that she is being primed as a future leader of the isolated country as her father showed off his latest, largest nuclear missiles.

Health-care workers have new hand-washing guidelines. Here's how you can apply them

The way respiratory viruses have circulated this fall and winter, most Canadians could probably benefit from a hand-hygiene refresher. Here are the latest hand-washing best practices to apply in your daily life.