Posts about $100 bills, zip ties left by sex traffickers believed to be a hoax: police 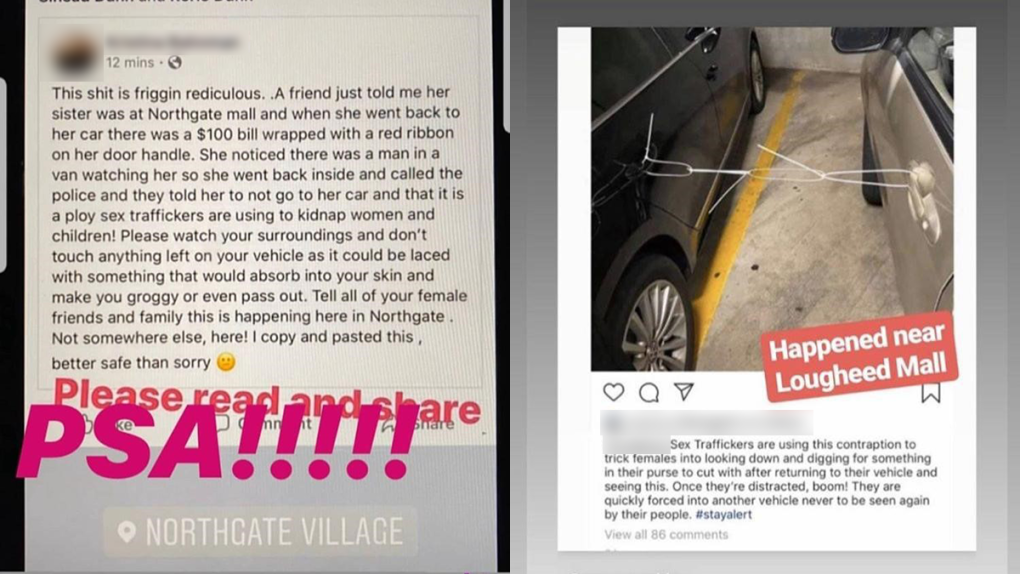 This combination image shows two posts circulating on social media, both of which police believe to be a hoax.

VANCOUVER -- Posts circulating on social media about $100 bills and zip-ties in Canadian and U.S. cities appear to be a hoax, police say.

Versions shared with CTV News Vancouver appear to suggest the incidents took place in a parking lot in Burnaby, B.C., though similar posts are circulating in the Edmonton area and in California.

One post claims the sister of a friend of the Facebook user found a $100 bill wrapped with a red ribbon and attached to her car door handle.

"She noticed there was a man in a van watching her so she went back inside and called the police and they told her to not go to her car and that it is a ploy sex traffickers are using to kidnap women and children!" the text reads.

"Please watch your surroundings and don't touch anything left on your vehicle as it could be laced with something that would absorb into your skin and make you groggy or even pass out. Tell all of your female friends and family this is happening here in Northgate. Not somewhere else, here!"

But the person who posted it wrote that it wasn't her story; she'd copied and pasted it from elsewhere. A screen grab of the Facebook post was being shared on Instagram with the message, "Please read and share!"

A second story being shared online shows the handles of two vehicles connected with links made by zip ties.

The Instagram post, which has been published under several usernames, claims it's a "contraption" sex traffickers are using to "trick females."

"Once they're distracted, boom! They are quickly forced into another vehicle never to be seen again by their people."

Posters are using the hashtag "stayalert," and many say the incident occurred at the Northgate Mall.

The location may be behind the confusion, as there's a Northgate Mall in San Rafael, Calif., and another in Edmonton, as well as a mall in Burnaby called Northgate Village.

Some of the posts, however, do not include a location, and imply that the incident happened near where the poster is located.

Believed to be a hoax: EPS

Two versions submitted to CTV News claimed the stories were based in Burnaby – "happened near Lougheed Mall," one reads – but Edmonton police have also addressed the circulating "PSA."

"Recently, there has been a post that is circulating across social media platforms claiming criminals are placing $100 bills laced with a debilitating chemical or substance on cars in a mall parking lot in Edmonton, as a means of making drivers, specifically women, who touch the note pass out so that they or their children can be kidnapped," the Edmonton Police Service posted on Facebook.

The EPS said they'd fielded questions about the posts, but have not received any reports of it actually happening in the city.

As such, they believe it's a hoax.

"We appreciate the community taking a proactive approach to confirm whether these posts are real. If you do have a concern or wish to report suspicious activity, please call our non-emergency line at 780-423-4567 or come in to a station," the service wrote.

In Burnaby, the RCMP had a similar message. Officers were aware of the posts, but have not been able to find any report, investigation or complaint made in the Metro Vancouver city.

"We would ask that if this has occurred to anyone in Burnaby that people contact us immediately but as of right now this appears to be a post that has unfortunately been shared on social media and caused unnecessary concern to Burnaby residents," the RCMP said in an email to CTV News Friday.

"We caution people to think twice, do some research and if they are concerned about whether this occurred or not to contact police before sharing these posts."

The detachment said the same information outlined in the post has been circulated in the U.S. in the past.

Media organizations south of the border who've reported on similar posts also found them to be fake.