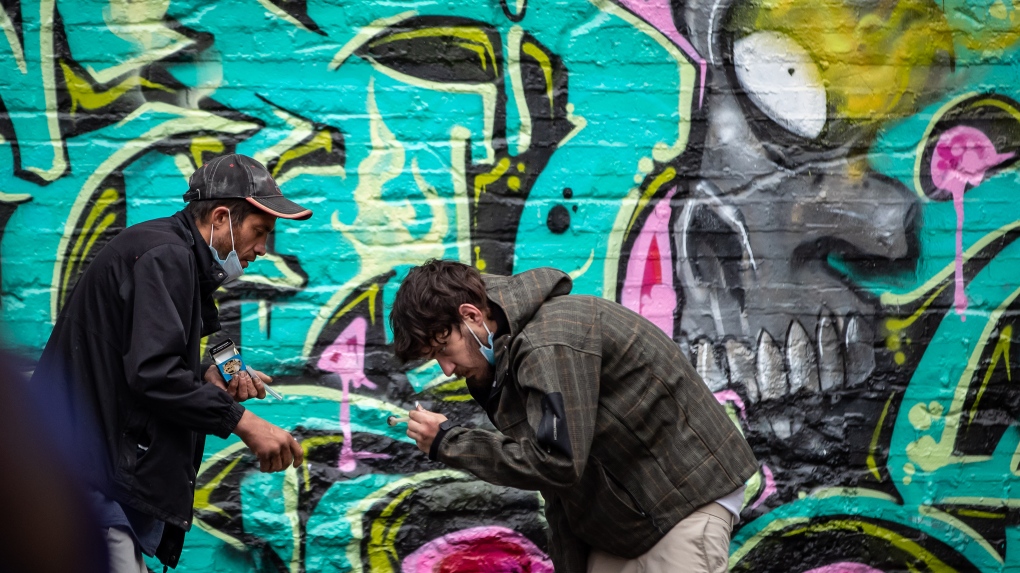 Two men are seen at an outdoor supervised consumption site in the Downtown Eastside of Vancouver, on Thursday, May 27, 2021. (Darryl Dyck / THE CANADIAN PRESS)
VANCOUVER -

A new study suggests that the presence of more overdose prevention sites (OPS) in B.C. has been associated with a wide range of health benefits.

The study was published in the peer-reviewed journal Addiction on Thursday and was conducted by researchers from the B.C. Centre on Substance Use (BCCSU) and the University of British Columbia.

Researchers aimed to measure the impact of the OPS scale-up that began in Vancouver in 2016, in response to a dramatic rise in overdose deaths due to injection drug use.

At the time, research showed that the annual overdose death rate in B.C. was 20.4 per 100,000, which was a rate 84 per cent higher than in 2015. This prompted government officials to declare a public health emergency in April 2016.

For the study, 745 people who inject drugs in Vancouver were interviewed between January 2015 and November 2018 to find out how additional OPS changed supervised injection service use, public injection, and syringe change and addiction treatment participation. Two ongoing cohort studies based in the city were also used as part of the research.

According to the authors of the study, the findings build upon previous evidence that OPS can reduce fatal overdoses, reduce the transmission of diseases like HIV and Hepatitis C, as well as improve the well-being of neighbourhoods by reducing criminal activity.

"Overdose prevention sites are low-barrier settings that not only prevent overdose deaths, but also have the added benefit of bringing people into a supportive environment where they can get the help they need," said lead author and research scientist at the BCCSU Dr. Mary Clare Kennedy in a press release. “Given the worsening of the drug poisoning crisis across the country, access to these services should be expanded.”

According to the latest report from B.C.’s chief coroner, the death rate due to toxic illicit drugs has nearly doubled since 2016. As of September 2021, the rate was sitting at 39.4 deaths per 100,000 residents in the province.

B.C.’s chief coroner also noted in the report that fentanyl and its analogues have been detected in 84 per cent of all 2021 illicit drug deaths.

When the data from the report was released in earlier this month, B.C.’s minister of mental health and addictions noted that the province had pledged $132 million in investments over the next three years for treatment and recovery. The provincial government has also requested a federal exemption that would allow B.C. to decriminalize small amounts of hard drugs.

According to the new study, there are currently only 40 OPS operating in Canada, and only 38 federally sanctioned supervised consumption sites (SCS), which are similar to an OPS, but do not perform assisted injection. Areas such as Ontario for example, only have OPS in London, Toronto and Ottawa.

Researchers said that those who use drugs often prefer an OPS to an SCS due to the assisted injection component, as well as the fact that they are staffed by peers and hope to see more created in the future.

“This research shows exactly what we are seeing on the frontline - that OPS save lives in so many ways,” said Sarah Blyth, a co-founder of the Overdose Prevention Society in a press release. “I hope this information helps guide government officials.”