With British Columbia seeing only a slight decrease in COVID-19 infections and one of the highest transmission rates in the country, doctors and health officials are urging outdoor activities whenever possible for Halloween revellers.

In the past week, B.C. has seen the third-highest rate of COVID-19 cases in the country per capita (78 cases per 100,000 residents), now close behind Alberta (86 per 100,000) which has managed to curb new infections significantly in recent weeks. Saskatchewan still leads the country with 124 cases per 100,000, while Ontario has pushed its already-low case rates even lower to just 17 cases per 100,000, according to publicly available data from the Public Health Agency of Canada. 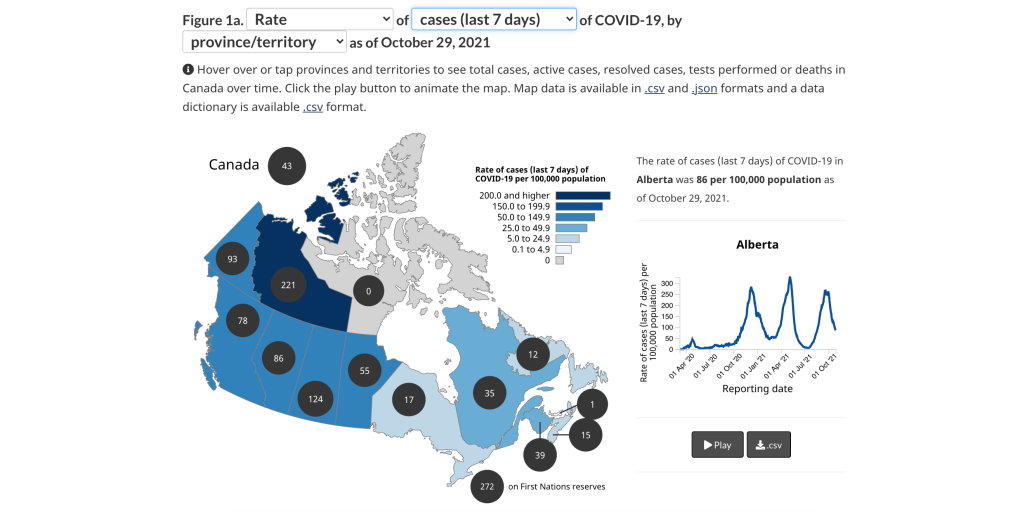 That has B.C.’s public health officials and frontline doctors alike emphasizing fresh air and good ventilation while doing as many activities as possible outdoors to help avoid a future spike in cases due to Halloween parties and activities.

“Ventilation is really important, so if the weather is nice I would encourage everyone to celebrate outside,” said Dr. Ran Goldman, a pediatrician and professor at the University of British Columbia.

“Don’t let (trick-or-treaters) in, don’t have big parties in your house. Being outside in smaller groups, using masks and distancing will help all of us stay safe.”

Goldman acknowledged that some parents will still be too anxious about the coronavirus to take young children trick-or-treating – and recent polling suggests more than half of Canadians will be reluctant to hand out candy – but insisted the doorway interactions are low-risk.

Goldman suggested parents to only let children wear one mask, warning that double-masking with a medical or cloth mask under a costume mask could lead to difficulty breathing.

He’s also encouraging families to bring hand-sanitizer on their trick-or-treating adventures, since little hands will likely grab handrails and other touch-points.

There are several respiratory viruses circulating this year, so hand hygiene is important, but that also comes with its own risks.

“Do not wipe down candy wrappers with disinfectant or cleaning products,” warned the BC Drug and Poison Information Centre earlier this week.

“When using hand sanitizer, wait until hands are dry before handling and eating candy.”

Earlier this month, the provincial health officer also emphasized the importance of fresh air and ventilation, supporting the idea of candy chutes and other methods of keeping physically distanced.

“We still don’t have vaccine for young children, particularly that age that enjoys going out and trick-or-treating,” said Dr. Bonnie Henry on Oct. 12.

“Keep it outside, keep groups small, do those fun things that worked last year.”

Dr. Isaac Bogoch, an infectious disease physician and University of Toronto associate professor, agrees that trick-or-treating is safe when the main hazards are avoided.

“I’m not worried about COVID transmission from touching the M&M’s box or something like that — this is transmitted through the air,” he said. “Think of where the bottlenecks will be, which might be at someone’s doorstep if there’s a bunch of families knocking on the door at the same time, so you want to keep your head on a swivel and avoid crowds.”

In the past week, British Columbia has continued to struggle through the fourth wave relative to other populous provinces, recording more than quadruple the number of confirmed COVID-19 deaths as Ontario on a per capita basis. The active case comparison has B.C. showing five times as many cases when adjusted for population.

While Ontario had been testing more people than British Columbia for most of the pandemic, in recent weeks that has shifted. On Friday, B.C. performed 34 per cent more tests per capita, according to daily published data from the Public Health Agency of Canada.

For much of the province, there are no limits on private gatherings like Halloween parties, nor are there occupancy limits in bars and restaurants, where all attendees must now show proof of full vaccination.

In the Northern, Interior, and the eastern Fraser health authorities, however, there are public health orders in place banning unvaccinated households from having more than five visitors. Those areas of the province continue to see the highest COVID-19 infection rates and some of the lowest vaccine uptake.

Nonetheless, a group of independent scientists, data analysts and infectious disease experts is "cautiously optimistic" the slow decline of cases will continue and the worst of the fourth wave is behind us, but warns that "if we get overly optimistic, we lower our guard, and you know what happens.”