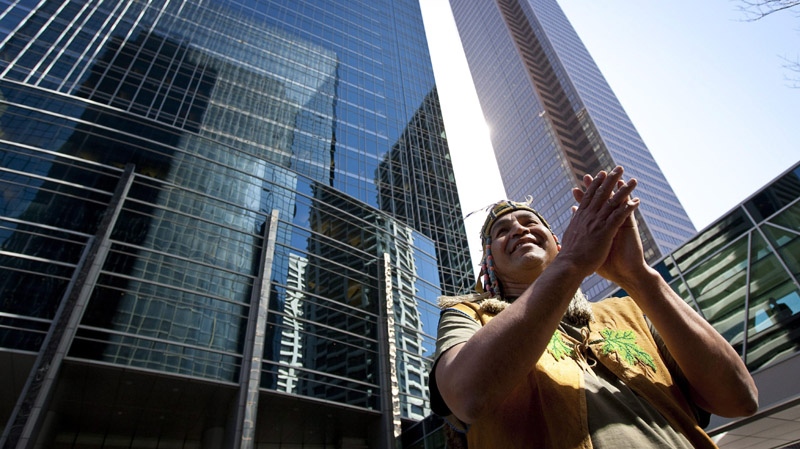 In this May 11, 2011 file photo, hereditary chief of the Beaver Clan Tsohdih Erickson applauds after a march by members of the Yinka Dene Alliance through downtown Calgary, protesting Enbridge Pipeline's Northern Gateway project.

The head of the Assembly of First Nations says aboriginal communities need to be treated as partners and not simply as afterthoughts in the planning of major projects such as the Northern Gateway pipeline.

The $5.5-billion proposal by Enbridge Inc. would see Alberta crude shipped to the West Coast by pipeline and exported to Asian markets by super tankers from a marine terminal at Kitimat, B.C.

Northern Gateway has attracted fierce opposition from First Nations, environmental and other groups who fear oil could be spilled from the pipeline itself or from the tankers sailing through narrow coastal channels and cause grave ecological harm.

National Chief Shawn Atleo, a resident of the West Coast, said environmental concerns aside, lack of consultation with First Nations is a serious problem on any major project.

"First Nations will be invited into a conversation when a project is either near or partially realized already," he said Thursday following a speech to the Calgary Chamber of Commerce.

"Business plans are in place, financing is well underway and the vision for a particular project will have gone a long way down the road already," he said.

"First Nations are often invited in at the end. It's very much a legal framework around consultation requirements. That's not conducive to the rights and the treaty rights."

Atleo said First Nations aren't merely stakeholders when it comes to the extraction of natural resources -- they are rights holders and the regulatory processes don't reflect that reality.

"They aren't always opposed to development; First Nations aren't just supportive of development at any cost."

Enbridge says the pipeline would bring jobs and economic development to northern B.C. communities. But many say it's simply not worth it to endanger their way of life.

Hearings into the proposal are underway and thousands of people are registered to speak.

A Joint Review Panel had been expected to make a recommendation to the federal cabinet on the pipeline by the end of 2012, but a decision is now expected to be delayed a year due to the volume of comments the panel must hear.

Atleo said aboriginal rights aren't just a concern in regard to Northern Gateway.

"It's not just the potential devastation from oil and gas. We've been subject to unilateral clear-cut logging. We've had industrial fish farming.

"The pattern of unilateral application of business practices and of laws and regulation in our territories is a practice that has to stop."