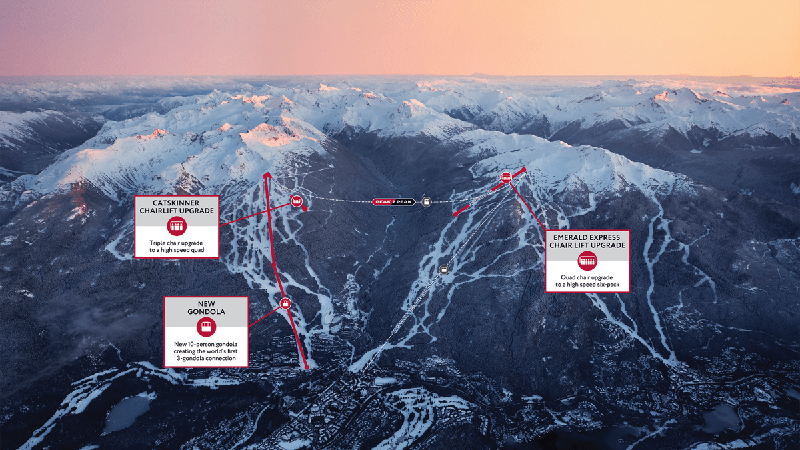 A map of the lift upgrades by Doppelmayr USA is shown in an image from the Whistler Blackcomb website.

The winter season starts at one of Canada's largest ski resorts next week, a month before winter officially begins. But when the lifts start up on Nov. 22, one of the routes uphill will not be available.

The new Blackcomb gondola was supposed to be up and running by the start of the season, but the company behind the new lift said it's expected to take another three weeks. The 10-passenger gondola is replacing the Wizard and Solar chairlifts, taking skiers and snowboarders from the base of the mountain up to the Peak 2 Peak gondola.

The delay means that skiers and boarders who had hoped to access Blackcomb Mountain from the Upper Village, home to hundreds of condos and high-end resorts like the Fairmont and Four Seasons, will likely have to walk or catch a ride to Whistler Village to upload.

In a statement to CTV News, Doppelmayr USA did not provide specific details, but said it had met "unforeseen delays" in what it called a large and complex project.

"We are putting our full effort into finishing the gondola project and will complete it by December 14th, 2018," president Mark Bee said in the statement.

"I would like to apologize to the guests of Whistler Blackcomb for any inconvenience they will experience from this delay."

Doppelmayr did complete its upgrades to the Emerald and Catskinner chairlifts, Bee said, both of which will be running next Thursday.

The Emerald was upgraded to a high-speed system that can fit six people, side-by-side. And the three-seater Catskinner was replaced with a new, high-speed quad lift.

The resort was purchased by Vail in 2016, a move that saw 60 jobs eliminated later that year. The new owner committed to a $66-million upgrade last winter, including the new gondola and chairlift upgrades.