After declining last week for the first time in more than a month, the number of COVID-19 patients in B.C. hospitals this week has increased again.

As of Thursday, there were 596 test-positive patients in hospital in the province, including 54 in critical care. Both of those numbers are the highest B.C. has seen in months. 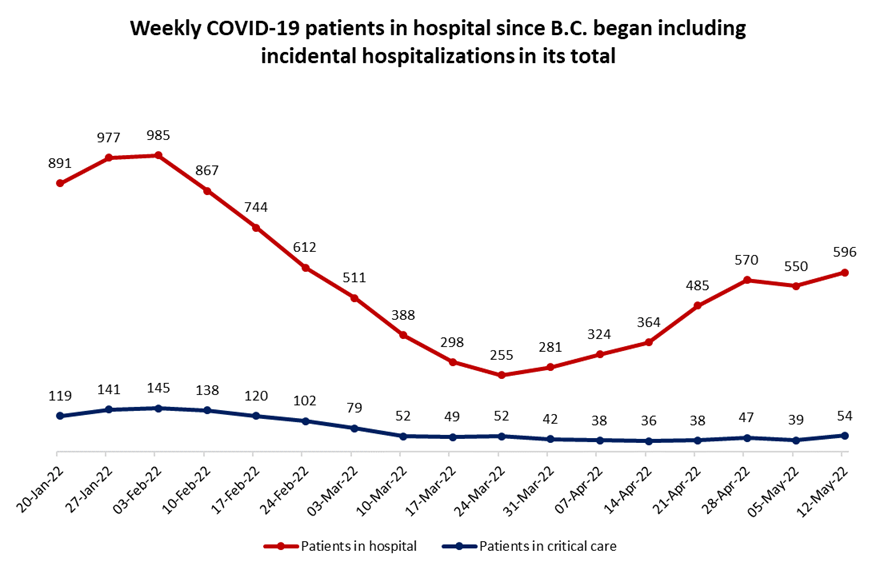 The number of COVID-19 patients in hospital and critical care on Thursdays since mid-January, according to the B.C. Centre for Disease Control.

Hospitalization totals reflect a "hospital census" in which everyone who tests positive for COVID-19 is included, even if the disease is not the primary reason for their hospitalization.

Since the province switched to this reporting model in January, the number of patients in hospital on a Thursday has been as high as 985 and as low as 255.

The numbers of COVID-19 patients in hospital and critical care are the only two numbers the province releases on a weekly basis that reflect the current situation in B.C. The rest of the numbers released Thursday pertain to the last full epidemiological week, which was May 1 through 7.

During that period, the province recorded 1,987 new cases, 331 new hospital admissions and 59 new deaths, according to the weekly report from the B.C. Centre for Disease Control.

In addition to being nearly a week old, each of those numbers comes with a lot of caveats.

The new cases number reflects only infections confirmed or deemed probable through lab-based testing. Because B.C.'s current testing strategy does not allow most people with symptoms to access a publicly funded PCR test, the true number of new infections that occurred in the province between May 1 and May 7 is both unknown and unknowable.

If the BCCDC tracked rapid antigen test results, the number of new infections for the week would likely be much higher.

The new hospital admissions number is considered preliminary and is expected to grow "as data become more complete," according to the BCCDC.

The same is true of the new deaths number, which has the additional caveat of reflecting "30-day, all-cause mortality." This means it includes all deaths involving people who tested positive for COVID-19 within 30 days of their deaths, whether or not the disease is what caused them to die.

A recent CTV News analysis of BCCDC data found that the switch to counting deaths in this way – as opposed to attempting to report only deaths believed to be at least partially caused by COVID-19 – has contributed to the flattening of reported death rates across different vaccination groups.

While provincial data previously showed unvaccinated people dying at a significantly higher rate than those with two or three doses of vaccine, it now shows similar death rates across the three groups. The Ministry of Health attributes this, in part, to the switch to all-cause mortality.

While the data the BCCDC releases each week comes with many caveats, it can still provide a glimpse into the overall course of the pandemic in the province.

The increase in the number of patients in hospital this week suggests the strain of the sixth wave on the province's health-care system has not yet begun to ease.

Hospitalizations are typically a lagging indicator, however, and some of the data released this week suggests the sixth wave may be receding.

The 1,987 new lab-confirmed cases of COVID-19 reported this week for the period from May 1 to May 7 – while not reflective of the total spread of the virus in the province – is a notable decline from the previous week's data.

Last Thursday, the BCCDC reported 2,283 newly confirmed cases for the week of April 24 to 30.

Similarly, after showing mixed signals during the week of April 24 to 30 – which was itself an improvement from the sustained increase seen in the weeks before that – wastewater surveillance in the Lower Mainland now shows declining coronavirus levels at four of five treatment plants, according to the BCCDC's weekly "situation report."

It's also notable that new hospital admissions, while incomplete and expected to grow, are starting at a lower point this week than they did last week.

For the period of April 24 to 30, the BCCDC initially reported 375 new admissions, a number that has since been revised up to 434.

This week, for the period of May 1 to 7, the province has reported 331 new admissions.

The same cannot be said for deaths, which began at 50 last week and have grown to 68 in the latest update. This week's death number began at 59, with more expected to be reported as data becomes more complete.

According to the BCCDC, the province administered 37,255 new doses of COVID-19 vaccines during the week of May 1 to 7, or an average of just over 5,300 per day.

Most of those doses were booster shots – either third or fourth doses – with just 2,175 new first doses and 3,332 second doses administered.

Earlier this week, provincial health officials revealed that more than a million people had been invited to get a third dose but have not made an appointment.

BREAKING | Canada's inflation rate up slightly in April to 6.8 per cent: Statistics Canada

Statistics Canada says the annual pace of inflation crept up in April as the cost of nearly everything at the grocery store continued to climb higher.