Not all luxury car drivers were racing: friend 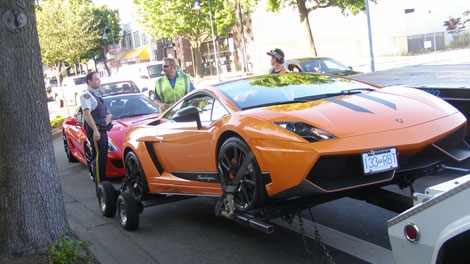 A friend of one of the 13 young drivers who had their luxury cars impounded Wednesday after a street race on Highway 99 says not everyone was breaking the law.

Witnesses reported seeing the vehicles – including Ferraris, Maseratis and Lamborghinis – zoom through Metro Vancouver at speeds of up to 200 kilometres per hour before police found and seized them in Surrey and White Rock at around 3:30 p.m.

Police say two cars would stop traffic, leaving a gap on the highway in which the rest could race.

But a friend of one of the drivers, Lorenzo Garcia, says some of the drivers didn't want to participate, and had split from the group when police pulled them over.

"Four of them pulled back, including my friend, and said, you know, ‘We don't want to do this,'" Garcia told CTV News.

"They exited out and went somewhere else, but wrong place, wrong time – they still got pulled over."

Garcia said that his friend "never breaks the law," and "drives as if we were driving a Dodge Caravan."

"If he wants to race, he takes it to the track. He never street races, ever."

All 13 drivers – who are Vancouver and Richmond residents under the age of 21 – have received $196 tickets and are being charged with driving without due consideration.

Their vehicles, worth an estimated $2 million combined, were impounded but will most likely be released next week. Only one of the drivers' vehicles was registered in their own name, according to RCMP Supt. Norm Gaumont.

Gaumont acknowledged that the penalties have been disappointing to many in the public, but said more evidence is needed for stronger charges.

Officers didn't directly witness the drivers breaking the law, and investigators have yet to track down video proof.

"If a helicopter had spotted it and we had good evidence, we could charge them with dangerous driving and we could seize the vehicles permanently under the civil forfeiture law," Gaumont said.

"Certainly if I could, I would in this instance."

Anyone who witnessed the street racing or shot video of the incident is asked to contact police.

Mark Ramsay at the Sports Car Club of B.C. believes that the province should put more restrictions on new drivers, like Australia does.

"They have a graduated system down there where you can't even drive a high-performance car until you get past a certain point in their licensing system," he said.

The Ferrari Scuderia and BMW M6 had a combined value of $310,000, representing the largest forfeiture in the province's history at the time. The office's mandate is to deter illegal activity by appropriating cash and assets associated with it.

With a report from CTV British Columbia's Michele Brunoro