VANCOUVER -- As per-capita comparisons from Canada’s top doctor show B.C. infection rates in line with other hard-hit provinces, CTV News has learned the province has no intention of using two technological options to curb infections.

The statistical analysis was part of Dr. Theresa Tam’s modelling announcement in Ottawa, where she warned cases are on track to quadruple by the end of December if people don’t take dramatic action to limit interactions. That would mean 20,000 cases per day across the country, with roughly 2,000 in British Columbia.

CTV News asked B.C.'s Ministry of Health whether officials were contemplating using the emergency alert system to send text messages in areas hardest-hit with new infections, like the Lower Mainland. Ontario used its system for an urgent plea for recent travellers to stay home in the early days of the pandemic.

“At this point in time our government does not believe a broadcast intrusive alert is necessary,” read an email response from Emergency Management BC. “While the Alert Ready system is useful in a situation where public safety relies on immediate notification, the alert system only informs on a moment in time. The province has been providing regular briefings as the situation is continually evolving. The communication of orders has also gone out through a variety of channels, including media, highway signs, social media, online content, stakeholders, and community leaders.”

That message is somewhat at odds with the premier’s comments earlier this week noting that there are many people who don’t pay attention to government briefings or news media.

“We’re accelerating our communications; we need to find different ways to talk to different demographics,” said John Horgan on Wednesday. “We need to find ... strategies to embrace and engage with those people who are not hearing this message. We’re always looking at strategies.”

CTV News also tried twice to learn whether the province had made any progress in adopting the Covid Alert App, which is heavily promoted by the federal government and used by every province but B.C. and Alberta.

The government did not provide a response, suggesting that the reserveations expressed by B.C.’s top doctor last month remain.

“It's been a challenge for us,” said Dr. Bonnie Henry, insisting it isn’t an effective tool. "We've not reached an agreement … it's not at the point where it would be helpful for what we're managing here in B.C. for our pandemic right now."

There will likely be growing calls for B.C. to adopt the app, whether or not it’s the perfect system. Henry has acknolwedged the surge of infections in recent weeks has put such a strain on the contract-tracing system that public health workers are “at the brink” of losing track of where infections are taking place – and isolating those who may have become sick and could unknowingly exposing others. 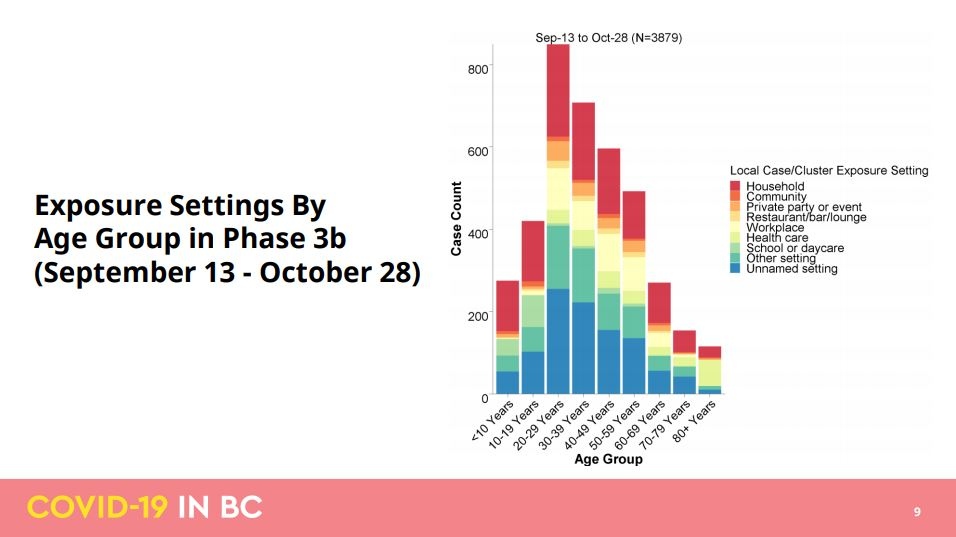 The government’s own data provided at a briefing outlining demographic and modelling data on the unfolding pandemic last week showed that while most British Columbians are contracting COVID-19 in their homes, there’s a significant proportion of people who don’t know where they caught it.

The chart outlines exposure locations only from mid-September to Oct. 28. On that date, the province reported 242 new infections but infections had surged to 727 on Nov. 17, making it challenging for contact-tracers to keep up despite more being hired each week. All eyes will be on the next monthly modelling update to see how many of November’s infections will have unknown sources, which make future infections more difficult to prevent.