VANCOUVER -- New modelling shows B.C.'s daily COVID-19 case numbers have been doubling every 13 days, leaving the province's contact-tracing teams struggling to stay ahead of the spread.

The data shared by provincial health officer Dr. Bonnie Henry on Thursday suggests B.C. could soon see upwards of 1,000 new cases per day if people don't alter their behaviour. The province has recorded 3,809 cases over the last week alone, for an average of 544 per day.

"We've seen a dramatic increase, particularly in the last couple of weeks, and it's stretching our ability to cope from a public health perspective," Henry said, noting that B.C.'s case rate per million residents has surpassed Ontario's in recent days. 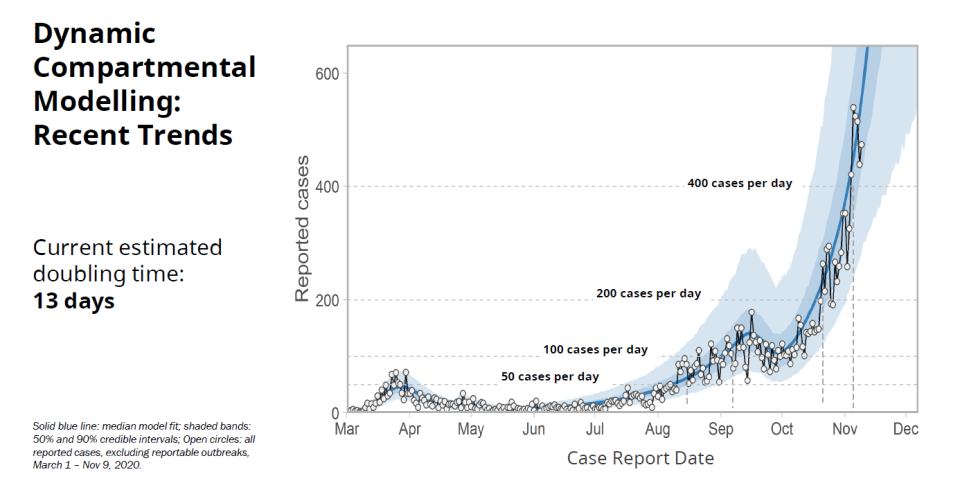 The alarming numbers, and the strain they're putting on contact-tracing teams, are behind the province's strict-but-temporary new rules around socializing, Henry said.

The provincial health officer didn't blame the spike on individuals or businesses, but said it's clear the public must adapt to their new reality – and soon.

"The thing we're learning about this virus is that it can now transmit very easily as we're moving indoors, as the weather's changing, and we need to pay attention to that," Henry said.

The province's reproductive rate, which is an average of how many additional infections are generated by each new case, has once again topped 1.5.

B.C. had managed to bring it below one before Thanksgiving, but has unfortunately seen "a takeoff of the virus in our communities" since then, Henry said.

"When you're above one, that gives the potential for it to spread quite rapidly," she warned. 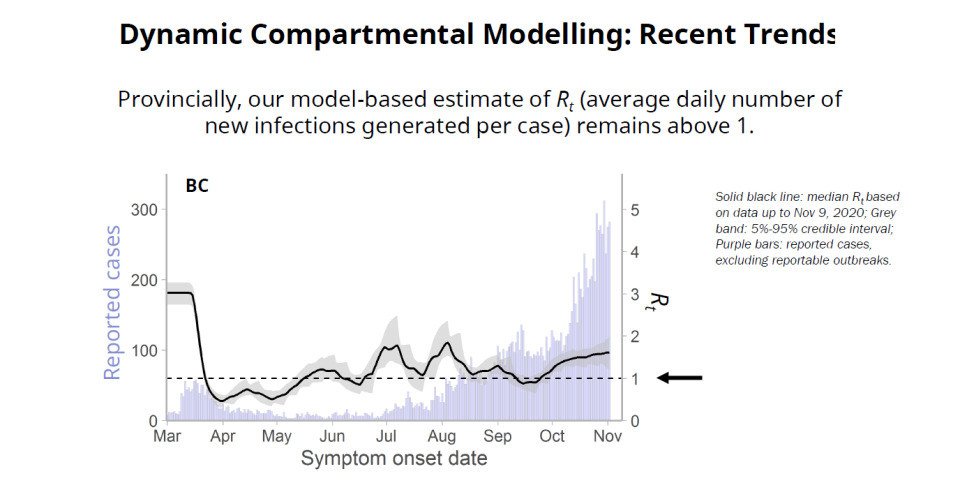 The modelling data also showed where people in B.C. are catching COVID-19, and the primary source continues to be households and social interactions, including family gatherings and parties.

Henry said while many gyms are taking "all the right measures" to prevent spread, people are still sometimes transmitting the virus in the way they congregate and catch-up with one another either before or after they exercise.

The numbers also show that young people are once again driving infection rates in the province, as they did in the summer before officials imposed new rules on bars, restaurants and vacation rentals.

People between the ages of 20 and 29 have seen the biggest spike in infection rates of any age group, and Henry said that has spilled over into other demographics – including the elderly, who are at much higher risk of severe complications from COVID-19. 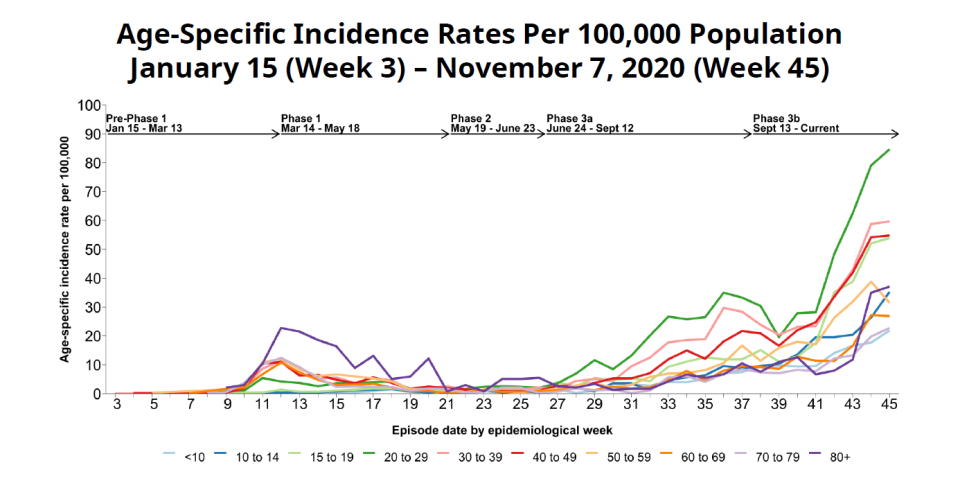 "We've seen, in the last few weeks, a dramatic increase in cases in people 80 years of age and older," Henry said. "And once again we're starting to see spillover into long-term care homes."

Health authorities in the Lower Mainland have been declaring outbreaks in seniors' home on a daily basis, and hospitalizations from COVID-19 – considered to be one of the best measures of the severity of the pandemic – reached a record high of 155 on Thursday.

Officials said B.C. has hired 636 contact-tracers to date, most in the Fraser Health and Vancouver Coastal Health regions, and there are plans to hire more than 800 in total.

But Henry stressed that public health resources are still being stretched dangerously thin. She shared several real-life examples of contact-tracing investigations that highlight just how quickly one infection can cascade into a complicated web of transmission.

One involved an employee at an industrial site, who ended up causing 48 other positive cases in that workplace alone. Another seven people were infected as a result of interactions with those workers, and an additional 111 people were forced to self-isolate for two weeks as a result of possible exposure.

Four additional workplaces were also put at risk, including a medical clinic, a lumber mill, a processing plant and a car dealership.

"This just gives you a sense of one single workplace where somebody unintentionally brought the virus in with them, whether it was because they didn’t recognize they had symptoms or they didn't feel they were able to stay home because of the nature of the work they were doing," Henry said.

Officials have consistently said contact-tracing efforts are crucial to keeping the province's rate of transmission in check. But Henry warned the rapid surge in cases has already put that work "in jeopardy," and that a major shift is needed to bring the province back down to a manageable caseload.

"Our ability in public health to find everybody in a timely way, particularly in the Fraser Health and Vancouver Coastal Health regions has been stretched to the max," she said. "And we are falling a little bit behind."