Emergency alert test: What the message said, and what to do if you didn't get it 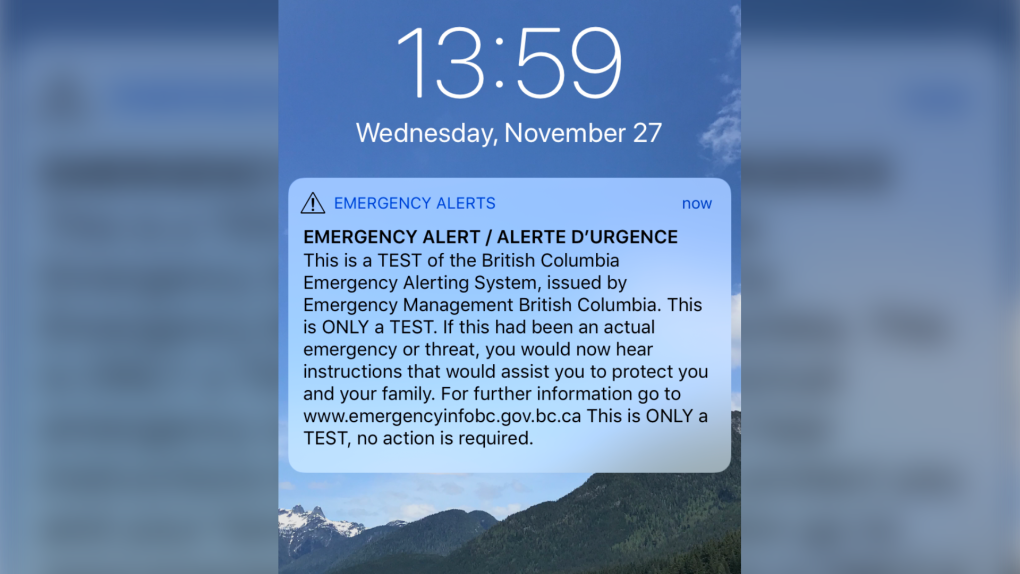 Testing of the emergency system was conducted across Canada throughout the day. In B.C., the test started at 1:55 p.m., though some got the message a bit later.

At CTV News Vancouver, most phones went off at the same time, regardless of service provider. But in some cases, even with the same carrier, the alerts were received five minutes apart.

The pop-up directed those who got the message to visit the EmergencyInfoBC website for more information.

A post on the site this week said the Alert Ready system, which allows officials to issue public safety warnings, only works on smartphones connected to an LTE or 4G network.

Phones must be compatible with wireless public alerting, have up-to-date software and be within the emergency alert area.

The Alert Ready website has a feature that helps cellphone users check their phone's compatibility. Those who have a compatible device but don't get the alert Wednesday are asked to contact their service provider.

It is not known how many phones are actually getting the alerts, The Canadian Press reported in the spring.

The federal government said it can't measure how many were received, but that "the confirmation in each jurisdiction indicates it was successfully distributed."

The system has been under scrutiny, especially in June when a tornado tore through parts of Ottawa and no warnings were sent.

But the Canadian Radio-television and Telecommunications Commission says 125 real warnings have been issued through the system since January, and credits the alerts with saving lives.

Ahead of the test, many police forces issued warnings against calling 911 in relation to the calls.

There is no test in Nunavut.