VANCOUVER -- New modelling on the spread of COVID-19 in British Columbia suggests the provincial government can relax some of its physical distancing measures while keeping new cases and hospitalizations at a manageable level.

Provincial health officer Dr. Bonnie Henry released updated data on B.C.'s fight against the novel coronavirus Monday, including three scenarios predicting what could happen when the government gives the public the green light to spend more time together.

Under the current distancing measures, British Columbians are asked to avoid socializing in person as much as possible with anyone who doesn't live in the same household. Henry has even said that meeting people outside in a park while maintaining a two-metre distance is an unnecessary risk, at least for the time being.

With those and other strict rules in place, officials estimate people are only having 30 per cent of their normal interactions. The latest modelling indicates if that were to increase to 40 per cent, or even double to 60 per cent, the number of new infections would remain relatively stable.

"That shows us that we might see an increased number of cases and some hospitalizations over time in the coming weeks but they would be manageable," Dr. Henry said.

"And there are things we can do that make these types of contacts – these increased contacts with people – safer as well." 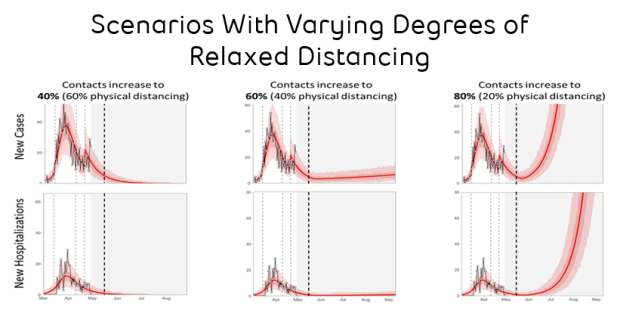 Increased contact does not mean hugging or shaking hands again, but being able to see a select number of friends and family face-to-face, at a distance, instead of being limited to interacting online or by phone.

If the government were to allow people to resume 80 per cent of their normal interactions, the modelling suggests the number of cases would skyrocket and quickly exceed the steep increase in infections that was recorded in early March.

"The more potential for transmission between people means that the virus will be able to increase exponentially and we might be in a situation that we've seen in other places in the world where we have a rapidly increasing outbreak, a rapidly increased number of people who need hospitalization," Dr. Henry said.

"And so our challenge, and our work together, is to find that sweet spot somewhere around increasing our contacts by at least half, or twice as many as we have now, but without allowing those opportunities for exponential growth of the virus within our communities."

Health officials said relaxed rules will be part of the "next phase" of the government's pandemic response, but did not give a clear timeline on when that will happen. B.C. Premier John Horgan is expected to provide more information on the province's plans on Wednesday.

The unaccounted for 'excess deaths'

The data shared by Dr. Henry also highlights a troubling increase in deaths that have not been directly connected to COVID-19.

Since March, there have been 170 of what the government has labelled "excess deaths" – lives lost that exceed the number that would normally have been expected in the province over that period.

Of those, 111 are known to have been caused by people catching the novel coronavirus, but Dr. Henry said it will take time to account for the other 60.

"We think it's very likely some of them will be indirectly related to COVID-19," she added. "We know that people were not going to the emergency department because of concerns about COVID-19 and maybe that there were excess deaths recorded as a result of that."

When it comes to deaths directly caused by the virus, the data shows 97 per cent of the deceased were over the age of 50, and 83 per cent had at least one chronic health condition.

Men are also overrepresented, making up 72 per cent of the dead even though more than half of the people infected in B.C. have been women.

Dr. Henry said officials are still trying to determine why older men are so much more susceptible to dying from COVID-19, and that there's "a lot of work going into understanding that phenomenon."

The latest data also revealed just how many health-care workers have fallen ill so far. Of the 2,224 infections recorded across the province, about 20 per cent – or 428 people – have been employed in the health-care sector.

Officials noted that not all of them caught the virus on the job. Some became sick after travelling, while others caught it from a family member or close contact.

A 'dramatic and sustained' decrease in cases

The only reason B.C. has been able to prepare for relaxing the rules is because the province has been so successful in flattening the virus's epidemiological curve.

Henry said the latest modelling shows there has been a "dramatic and sustained decrease" in new cases since officials imposed their strict physical distancing requirements, limited travel, closed some businesses and sent children home from schools.

"We have deflected our curve, we are coming down nicely, we have the measures in place that we know are working," Henry said Monday.

Officials also stressed that people must continue to be vigilant even after some measures are lifted or relaxed. That means washing your hands frequently, not touching your face and always staying at home while even mildly ill.

"Physical distancing, it has made a difference. It has allowed us to put the brakes on COVID-19 but we haven't stopped the car and it's very unlikely that we're going to be able to, at least in the coming months," Dr. Henry said.

"Our job, our role, our goal in the next months is to make sure that we learn how to live with this virus in a safe way that protects people."