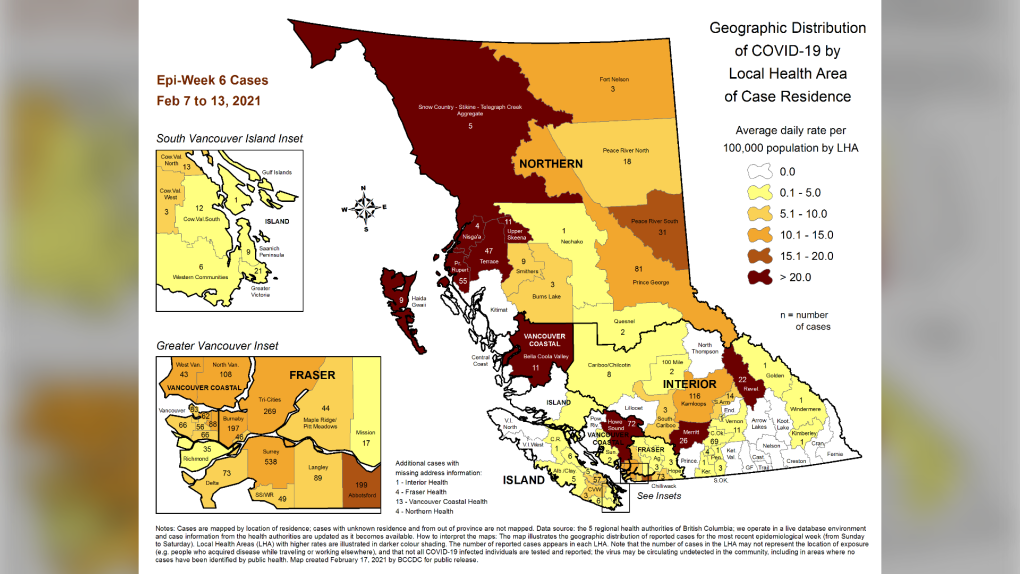 The B.C. Centre for Disease Control released this map of COVID-19 cases in the province for the week of Feb. 7 to 13. (BCCDC)

VANCOUVER -- The weekly tally of COVID-19 cases in the Whistler area has continued dropping in the latest map of infection data from the B.C. Centre for Disease Control, but the region still has one of the highest rates of new cases per capita in the province.

The most recent map shows the number of coronavirus infections detected in each of B.C.'s "local health areas" during the week of Feb. 7 to 13, as well as the approximate number of new cases per 100,000 residents of each region.

The Howe Sound local health area, which includes Whistler, recorded 72 new cases during the week in question. That total equates to more than 20 new cases per 100,000 residents each day, the highest per-capita range shown on the map.

That said, 72 cases is roughly half as many as the region recorded in the preceding week (when it saw 142 new infections), and roughly a quarter of the total it saw the week before (287).

While new coronavirus cases in Howe Sound have been declining sharply, some other local health areas with similar per-capita rates have seen their caseloads stay flat or rise slightly.

Two regions in Interior Health - Merritt and Revelstoke - have seen the equivalent of more than 20 cases per 100,000 residents in the last week, and their raw number of new cases has remained fairly consistent over the last two.

In Northern Health, there are six local health areas that cross the 20-cases-per-100,000 threshold in the latest BCCDC map, all of them clustered in the province's northwest corner.

Of course, most of B.C.'s new cases of COVID-19 continue to be detected in the Lower Mainland, where local health areas are more populous. While total new cases detected in local health areas in the Lower Mainland are much higher than they are elsewhere in the province, those areas are recording fewer cases on a per-capita basis than many other regions.

The area that includes most of the City of Surrey, for example, recorded more than 500 new cases during the week ending Feb. 13, but that total equates to between 10 and 15 cases per 100,000 residents.

Most other regions in Metro Vancouver and the Fraser Valley have the same or lower rates of new cases per 100,000 residents, the only exception being Abbotsford, which recorded 199 cases during the week in question, for a rate between 15 and 20 cases per 100,000.