As the Trump International Hotel & Tower celebrates its grand opening in downtown Vancouver, a new poll suggests the businesses inside could have some trouble attracting locals.

Several months and a handful of delays after its planned launch, the $360-million project is finally open, complete with an Ivanka Trump-branded spa, a Drai's nightclub and a MOTT32 fine dining restaurant.

But for now, the majority of British Columbians seemingly have little intention of stepping foot inside, according to a survey conducted by Insights West.

The polling company found 65 per cent of people in the province are "likely" to boycott a hotel, restaurant or store located in a Trump-branded property.

That's significantly higher than anywhere else in Canada; the national average was 45 per cent, according to the poll.

Respondents from British Columbia are also more likely to consider cancelling a planned trip to the United States over Donald Trump's presidency, at 42 per cent. That's 10 per cent over the Canadian average.

That could be because West Coasters are paying more attention to U.S. news. The survey found 94 per cent of B.C. residents are following political developments south of the border, compared to 83 per cent across the country.

They are more likely to have chatted both Canadian and American politics with family, friends or coworkers over the last couple months, according to the survey, and to have posted about Trump on social media.

And British Columbians appear to have the most faith that Prime Minister Justin Trudeau will be able to stand up to the leader of the free world, at 66 per cent. Albertans showed the least faith in Trudeau, at 37 per cent. 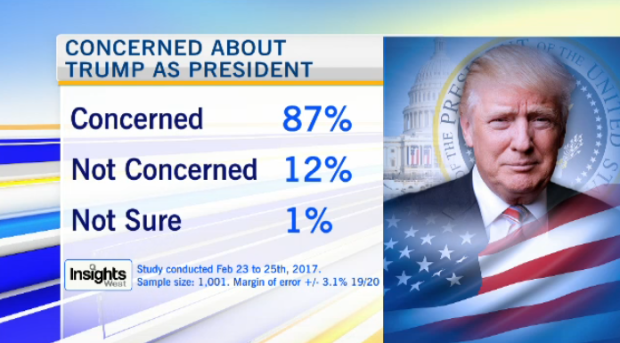 The Insights West survey was conducted from Feb. 23 to 25 among a representative sample of 1,001 Canadian adults.

Polls of that size have a margin of error of plus or minus 3.1 per cent.