Military aircraft could help with evacuations in B.C.'s wildfire response 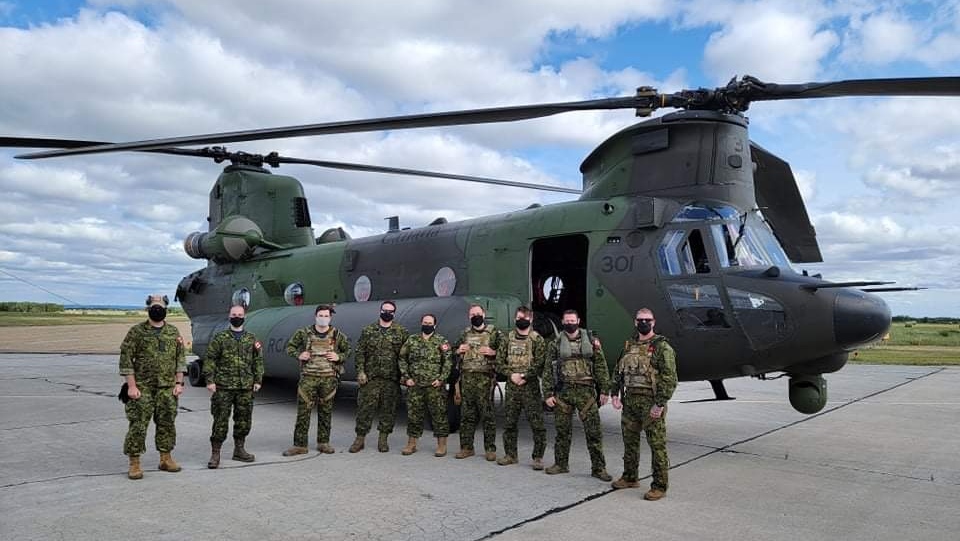 Canada’s military is getting ready to help with B.C.’s wildfire response, and has readied four tactical helicopters and a large military plane.

In a July 5 statement to CTV News Vancouver, a representative of the Canadian Armed Forces gave details on its agreement with the provincial government.

The “assigned support elements” – also known as aircraft and personnel – could include one CH-147F Chinook helicopter and three CH-146 Griffon helicopters, which are on standby in Edmonton, Alta., save for a copter that’s on standby in Petawawa, Ont.

A plane, the CC-130J Hercules from 8 Wing Trenton, which can carry up to 128 passengers, was also on standby in Edmonton as of Monday.

The aircraft and soldiers are prepared to help evacuate people if needed.

“(Canadian Armed Forces) personnel and air assets will provide airlift support in order to transport personnel and equipment into and out of areas affected by fires and provide emergency airlift for evacuation purposes, if required,” reads a statement from spokesperson Jessica Lamirande.

CH 147F Chinook helicopters boast a front and back propeller and according to RCAF's specs posted online, they cant travel 300 km/h for 1,100 km until needing to refuel.

Army personnel are also available to help on the ground with logistics and firefighting should it be required.

“We’re working closely with the province on finalizing the last details before being able to deploy assets into the wildfire zones ... it is critical to ensure we are in a position to provide the most effective support possible,” the statement continues.

“Periodic reassessments of the situation will be conducted in order to continuously evaluate the needs of the province and whether additional federal support is required beyond the requested period of support.”

A daylong memorial began Monday in Kamloops, B.C., at the site of what was once Canada's largest residential school on the one-year anniversary of the announcement of the detection of unmarked graves.

Hundreds of thousands of people remain without power after Saturday's powerful storm that left at least nine dead and caused extensive damage throughout southern Ontario and Quebec.

A Russian soldier who pleaded guilty to killing a civilian was sentenced by a Ukrainian court Monday to life in prison -- the maximum -- amid signs the Kremlin may hold trials of its own, particularly of the captured fighters who held out at Mariupol's steel plant.

The first of three charter flights bringing Ukrainian refugees fleeing Russia's invasion to Canada is to land in Manitoba this afternoon.

Wreckage found of plane that disappeared in Ontario with Alberta men onboard, police say

The wreckage of a small plane that disappeared last month in northern Ontario with two men aboard has been located in Lake Superior Provincial Park.

The Canadian royal visit took place at a time when many are starting to view Prince Charles differently, given that his destiny to be King seems to loom closer, Richard Berthelsen writes in his exclusive column for CTVNews.ca.

A new study that brought sniffer dogs to an airport to search for COVID-19 has found that dogs may be able to detect the virus with high accuracy just from smelling skin swabs.