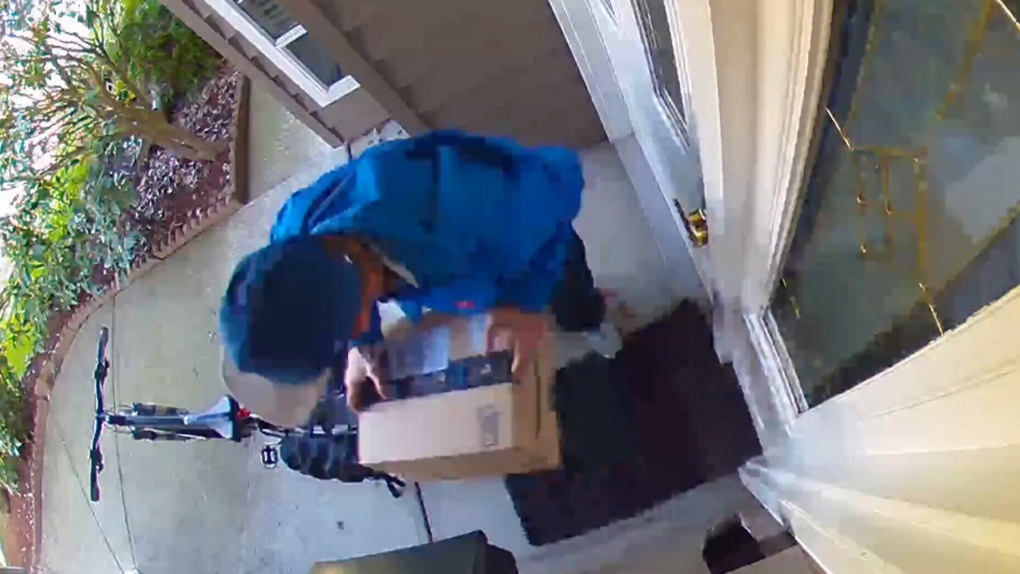 A man is seen taking an Amazon package from the doorstep of a Richmond B.C. home on Monday, April 2, 2018. (Reddit)

A 40-year-old man has been charged in connection with a series of mail thefts in Richmond, B.C. dating back to March and April.

In an April 2 incident, the owner of a home in 5000 block of Lackner Crescent captured doorbell camera footage of a suspect on a bicycle stealing an Amazon parcel from their doorstep.

The homeowner didn't want to be named at the time, but told CTV News she arrived home shortly after the theft and saw the assailant with her package a short distance away. She followed the suspect with the intention of confronting him, but he left the scene. That's when she contacted authorities.

"After a lengthy investigation by Richmond RCMP Property Crime Unit (PCU), the suspect was identified and we were able to connect him to similar crimes in Richmond spanning from March 2018 to April 2018," Mounties said in a statement issued Friday.

Dana Adam Halifax is facing a total of five charges, including two counts of theft from mail, mischief, theft of a parcel under $5,000 and theft of mail.

"Mail theft is a problem that we take very seriously,” Sgt. Simon Lee said in a statement. “Stealing parcels or mail is theft, pure and simple. We were very determined to identify the suspect and painstakingly followed the evidence. That determination proved very fruitful."

After the string of incidents, the RCMP offered several tips on how to prevent mail theft, including that parcels be sent to your place of work or delivered to a friend of family member and asking that the courier require a signature upon delivery.

Many online retailers such as Amazon also offer an option to have parcels delivered to a customer's local post office instead of their front door.