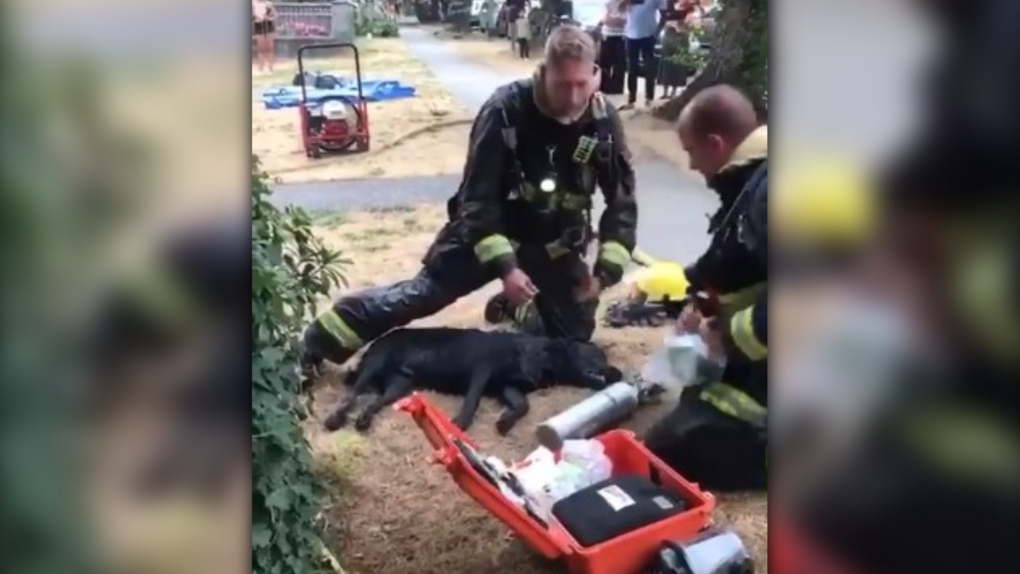 Firefighters help a seven-month-old black Labrador they pulled unconscious from the scene of a house fire in South Vancouver on July 31, 2021. (Twitter/Van Fire Fighters)
Vancouver -

Firefighters managed to rescue a seven-month-old black Labrador that was found unconscious inside a burning home in South Vancouver over the long weekend.

Gemmill said firefighters quickly entered the home and extinguished the blaze, and as the smoke cleared they found the young dog unconscious with burns on his leg.

Video posted to social media shows crews rushing to put an oxygen mask on the dog's snout, then petting his back as the animal lies motionless on the front lawn.

"We've got pet oxygen masks on a lot of our fire trucks so the members put oxygen on the dog, cooled him down, cooled his burn," Gemmill said.

After firefighters spent about half an hour tending to the animal, the owner rushed him to a veterinarian. Gemmill said it appears the dog, whose name is Jack, will be OK.

"Apparently he had a pretty rough 24 hours in the hospital but we got a call the next day that he had actually survived," the assistant chief said.

No humans were injured during the fire, but firefighters said the house sustained substantial damage.

It's unclear how the fire started, but crews believe it began in the basement of the home.

Fast and effective work by #Vancouverfirefighters at a fire in South Vancouver over the weekend. Here crews are providing oxygen to a pet pulled out of the fire. Great work Firehall #17 and #5! #humansbestfriend #iaff18 @CityofVancouver @Karen_Fry 🎥 submitted. pic.twitter.com/fo3fk0pavU