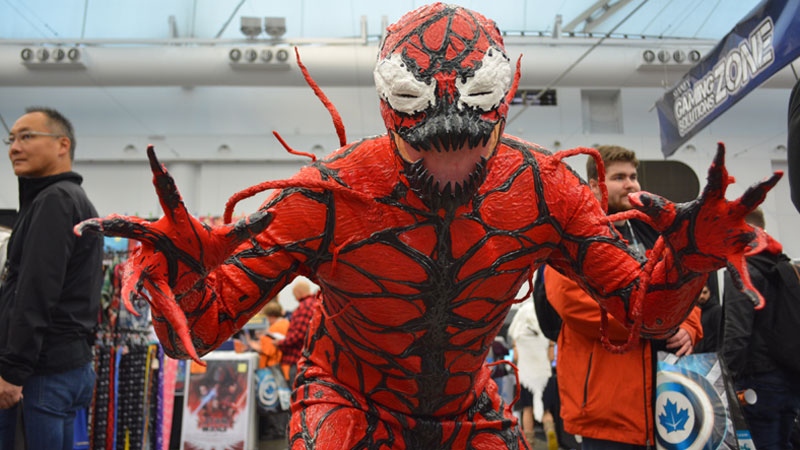 A fan dressed up as Carnage, one of Spiderman's enemies from the Marvel comics. (Robert Collins)

There's no telling who you might bump into at the Vancouver Convention Centre this weekend—Marvel and DC superheroes, Star Wars Stormtroopers, multiple reincarnations of Doctor Who and even The Fonz are all in town for Fan Expo.

That last character isn’t a fan in costume. You can actually say hello, get an autograph and take a selfie with Fonzie, AKA actor and author Henry Winkler, one of many stars of film and TV on site over the weekend.

"When you make a TV show or movie you’re on a set somewhere," he explains during the brief moments between greeting fans on the first of three days of marathon signing sessions.

"Then when you do events like this you finally meet the people who watch you. I look them in the eye and we talk. What a great closing of the circle."

Winkler’s reputation as a nice guy is richly deserved. Everyone approaching the iconic star is welcomed with genuine sincerity, beginning with a big smile and often ending with a heartfelt hug.

"It is a really warm experience," he says. "I meet people who are happy to see me, happy to be there and happy to meet other people. I can sense the community."

Now in its sixth year, close to half of all attendees at the annual celebration of pop culture, sci-fi, comics and games arrive in full cosplay attire. There’s always time to compliment a costume, take a photo and make new friends. For the diverse fandoms of B.C. and beyond, Fan Expo is arguably the social event of the year.

"The fans’ relationship with each other is organic," says Fan Expo vice president Andrew Moyes. "It’s a very inclusive and accepting community, a big melting pot of sci-fi, anime, gaming and horror. Fans can spend months on their costumes and this is where the community celebrates the work they’ve done."

The beauty of seeing fans sharing their passions and revealing their true selves is not lost on the owner of Sci-Fi Speed Dating, Ryan Glitch.

He says his organization is responsible for 273 marriages and 25 babies stemming from connections at comic cons.

"Whovians tend to wind up with Harry Potterheads. Star Wars and Star Trek fans get together, which surprises me," he says. "And video gamers like video gamers."

His favourite connection happened when a man and a woman both came dressed as the same Rebel X-Wing pilot.

"At the end of the session, she walked right over to him and said 'I think we should hang out.' I love seeing people come out of their shells," Glitch says.

Anyone visiting Fan Expo should be aware how infectious the friendly atmosphere can be. Whether you’re impressed by Wonder Woman, Deadpool, White Walkers or even The Fonz, don’t hesitate to say hello. It’s an essential part of fandom culture.

"Every day I have people tell me they grew up watching me with their parents and now they watch me with their children," says Winkler. "It is a gift that I do not take lightly. I am amazed by what people have been saying to me since 1975. I never get over the enormity of the warmth I receive."

Fan Expo Vancouver continues through the weekend at the Vancouver Convention Centre.