Ex-Mountie urged to be 'friendly,’ sleep with boss: claim 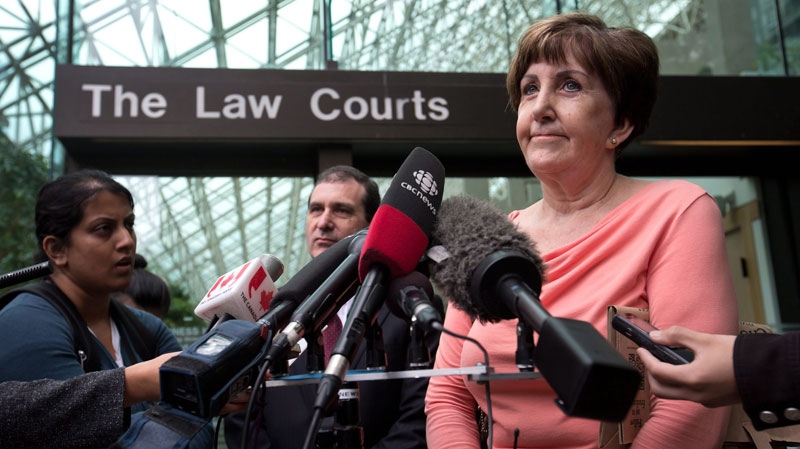 Former RCMP officer Valerie MacLean pauses as she speaks to reporters outside B.C. Supreme Court after the first hearing in a class-action lawsuit alleging sexual harassment and discrimination against the police force. Aug. 2, 2012. (THE CANADIAN PRESS/Darryl Dyck)

VANCOUVER -- Valerie MacLean joined the RCMP in the mid-1970s, only a few years after women were first welcomed onto the national police force, with a sense of pride and the belief she would be a game changer in a male-dominated profession.

So when a higher-ranking male officer began propositioning her and urged her to be "friendly" because it would be a good career move, she viewed his behaviour as a product of the times.

More than 30 later, the 58-year-old has joined a class-action lawsuit that spans decades and alleges widespread, gender-based discrimination within the RCMP.

"We felt that we were really advancing things ... that we would be paving the way for women. And I don't feel that way now," said MacLean, who went on to become the public face of the Better Business Bureau in B.C.

"I thought, well, what did we pave? What did we make different? It would seem that nothing's changed."

MacLean attended B.C. Supreme Court in Vancouver on Friday as lawyers filing the civil suit appeared before a judge for the first time.

She is among 200 current and former female RCMP members who have contacted the firm for the representative plaintiff, a 19-year RCMP veteran from Nanaimo, B.C. who launched the suit in March.

Though her suit appears to be the broadest in scope, it joins several similar actions filed since Cpl. Catherine Galliford broker her silence last November and unleashed a torrent of allegations.

Since then, the force's top brass have vowed to address complaints, even as more women come forward with their stories.

A lawyer jointly defending the federal attorney general and B.C. minister of justice told the judge on Friday he will argue some portions of the class action must be struck. That includes part of the suit alleging the governments bare direct responsibility for systemic negligence.

"This is a unique case, which alleges that there are problems with the system," David Klein told reporters after the brief hearing that introduced the case to the judge.

"Problems the RCMP has been aware of for many years, problems they should have fixed many years ago. Problems my clients now want them to repair."

The suit has yet to be certified. Klein said hearings won't commence until at least 2013, and he expects it could take years to wind through the courts.

The lawsuit was initiated by Janet Merlo, who alleges ongoing discrimination during her 19-year career in the detachment in Nanaimo, B.C., that included sexist insults, pranks involving sex toys, requests for sexual favours and other gender-based discrimination.

MacLean, who ended a post as executive director of the Vancouver Police Foundation in March, said she faced similar discrimination and harassment as a young police woman.

Between 1977 and 1979, one superior male officer repeatedly harassed her, especially while she drove a cruiser on the graveyard shift. He would sit beside her for eight hours and goad her into starting a relationship with him, all the while suggesting it would be good for her career.

MacLean rebuked the man's advances and he ended up not writing her a favourable assessment. She made complaints, but said he never faced any discipline.

Finally, she quit to escape the situation.

"This was not why we joined the RCMP, we joined to have a career," MacLean said Thursday, the first time she's publicly disclosed her experience.

"We didn't join to be harassed or be humiliated to be told our that our career depended on us being friendly or having relationships with our direct supervisors. I don't believe we were treated fairly and we certainly weren't listened to."

A spokesman for Justice Minister Vic Toews said the government cannot comment while the case is before the courts.

"Over the past number of months, we have heard extremely disturbing report about the conduct of some RCMP officers,"

Mike Mueller said in an email to The Canadian Press.

"That is why our Conservative Government made it clear that we would work closely with RCMP Commissioner Bob Paulson to take action to develop tools to restore pride in Canada's National Police Force."

Mueller pointed out that Toews recently table the Enhancing RCMP Accountability Act, which will strengthen the review and complaints body for the RCMP.

For her, joining the lawsuit is not aimed at winning any kind of damages. She wants to stand in support of her fellow female members who have told her they have shared experiences, many who have been too ashamed to come forward.

And she said she wants justice.

"That something is done and that this systemic culture in the RCMP of harassment and not accepting these women as equals stops," she said. "It's got to stop. The RCMP has got to look at how it's treating these women."

MacLean did go back for a second stint at the RCMP for several years in 1986, but left again when she became a single parent.

The federal government has already denied the abuse allegations made public by Galliford, who says her experiences resulted in alcoholism and post-traumatic stress disorder.

But the rash of allegations that have surfaced prompted the B.C. force to canvass hundreds of female officers for their experiences and announce it is training 100 officers to investigate internal complaints.

Last year, newly-appointed RCMP Commissioner Bob Paulson also acknowledged problems exist. He has since said the RCMP is conducting a nationwide gender-based audit to examine how policing policies relate to the advancement of women.