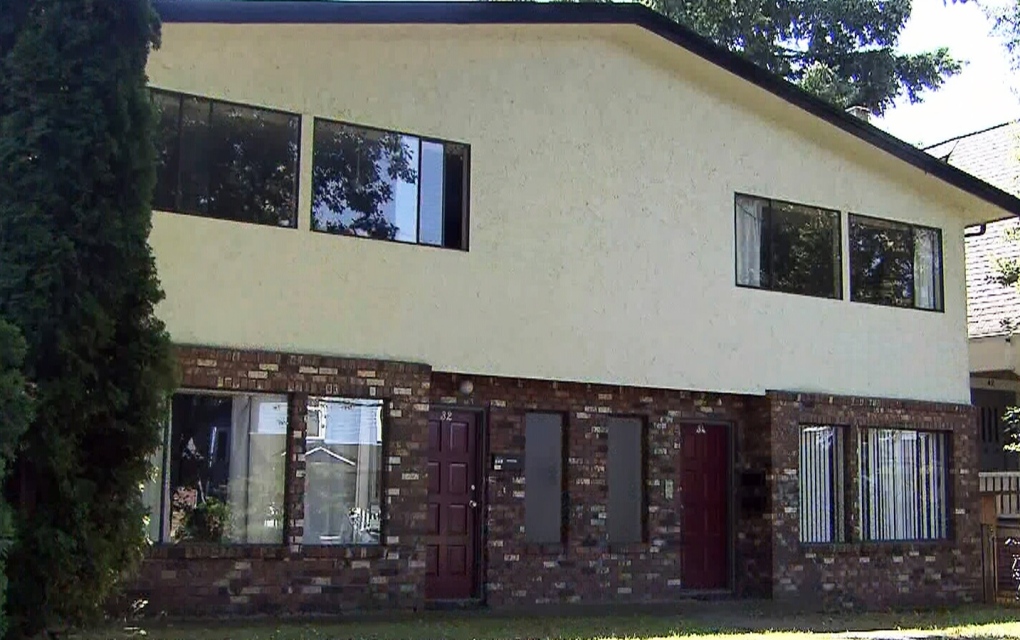 This file photo shows a duplex in Vancouver, B.C.

Residents of a B.C. duplex have been ordered to – among other things – stop letting people sleep in their cars parked in front of the property, according to a ruling on a dispute between owners.

The Civil Resolution Tribunal heard a number of claims related to the use of the yard and common property, accepting some and dismissing others in a decision posted Tuesday.

Francine Fincham brought the complaint against Norma Jean and Lily Greer, claiming the Greers had been "parking cars on the road, leaving items and trash on the road and in their backyard, operating a business on the road, letting visitors enter the property, letting people sleep in cars parked on the road and the garden shed, threatening her and letting their dog roam unleashed," according to the tribunal decision.

The Greers told the tribunal none of these claims were true and that their use of the property was "reasonable" and did not breach any strata bylaws.

The CRT, weighing the evidence provided on a balance of probabilities, found neither party's claims were fully supported. Additional claims by Fincham that her cat was harmed, she was harassed and that a gazebo was constructed were deemed inadmissible.

The first thing tribunal member Richard McAndrew addressed was the claim that the Greers operated a business out of a tent put up in front of the side-by-side duplex on common property.

Fincham said a relative of the Greers was operating a business that involved "car mechanic work, welding, metal grinding, painting" and buying and selling items, McAndrew wrote. In support of this, she submitted a "video that appears to show the tent structure brightly illuminated at night and emitting a loud grinding noise."

The Greers, claiming the activity did not constitute a business, did admit that a "relative buys and sells used items to earn income, which involves disassembling and reassembling items and metal grinding," the tribunal heard.

McAndrew found in favour of Fincham, saying the activity was loud, interfered with her electrical supply, and would have been "disturbing" and "disruptive" to a reasonable person.

The Greers were ordered to "immediately stop" this activity. They were, however, allowed to keep the tent.

Fincham provided the tribunal with a photo showing someone sleeping in a car on the road in front of the duplex, the tribunal heard. The Greers claimed this was a one-time occurrence, but McAndrew found it had "continued" even after the police were called on one occasion.

The tribunal found this to be "contrary to the road’s intended purpose for vehicle travel," and ordered the Greers to stop allowing it.

Regarding the shed, the tribunal found in favour of the Greers, who argued that they only allowed someone to sleep in the structure in their backyard garden once.

Another finding in the Greers' favour was the rejection of Fincham's claim that they regularly had visitors between 11 p.m. and 5 a.m., and that those visitors "engage in criminal activity, including drug trafficking and exchanging stolen property."

McAndrew said no evidence was brought to support that claim, calling it "speculative and unproven."

GARBAGE IN YARD, ON ROAD

When it came to Fincham's claims related to "excessive" garbage and "large amounts of trash," the tribunal's ruling was mixed.

While evidence was brought by Fincham showing "large amounts of tools, sports equipment, building supplies and miscellaneous objects crowded in the Greers’ backyard," McAndrew found that the mess had since been "significantly cleaned and decluttered."

Even though the yard remained "messy," the tribunal said, it was "not messy enough" that it interfered with FIncham's enjoyment of her lot.

The garbage on the road, the decision found, was another matter.

Fincham submitted pictures showing "large amounts of mechanical devices, supplies and trash stored on the road." In this case, McAndrew said the Greers' evidence of a clean-up was insufficient.

"They still store items and garbage there. I find that this is contrary to the road’s intended use for vehicle traffic," he wrote, ordering them to clear the space within 30 days.

The tribunal did not weigh in on Fincham's claim that the dog is dangerous, nor did it make a determination on the Greers' allegations that Fincham "enticed" the animal with treats.

The fact that the Greers' dog had been off-leash on common property was not disputed. Finding that to be a bylaw violation, McAndrew ordered the animal to be "leashed at all times."

Although McAndrew noted the duplex is a property "with no functioning strata council" that has never passed building-specific bylaws, he did find they are bound by the province's Schedule of Standard Bylaws as laid out in the Strata Property Act. Those bylaws, the tribunal ruled, must be enforced.

Salman Rushdie, the author whose writing led to death threats from Iran in the 1980s, was attacked and apparently stabbed in the neck Friday by a man who rushed the stage as he was about to give a lecture in western New York.

The August 'sturgeon moon' has passed over Earth: Here is what it looked like

Rising over beaches, buildings and statues, the last supermoon of the year created ample viewing and photo opportunities around the world Thursday night.

The City of Toronto is investigating a power outage that left a large swath of the downtown core including office buildings, a major mall and a university campus without electricity yesterday.

Former U.S. President Donald Trump has called for the 'immediate' release of the federal warrant the FBI used to search his Florida estate, hours after the Justice Department had asked a court to unseal the warrant, with Attorney General Merrick Garland citing the 'substantial public interest in this matter.'