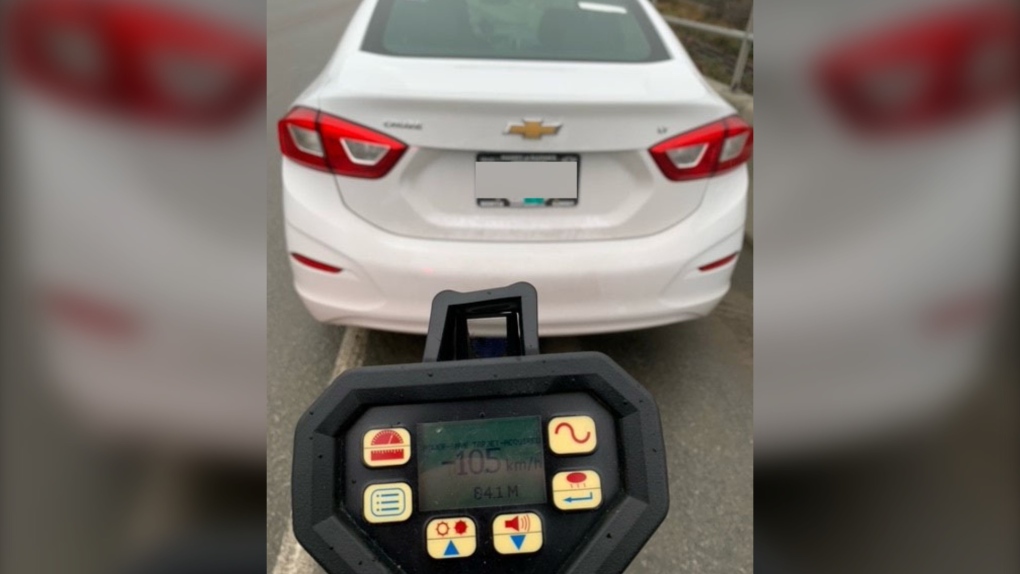 Mounties in Surrey say a driver was caught doing 105 km/h in a 30 zone. (Surrey RCMP/Twitter)

Mounties in Surrey say a dozen cars were impounded during a blitz on 104 Avenue last month and one driver was caught going more than three times the speed limit.

In a social media post Monday, Surrey RCMP said it used a Black Cat Radar system on 104 Avenue near 125 Street in mid-November.

According to officers, on Nov. 10 alone, 12 vehicles were impounded for 12 days each, all for excessive speeding in the one spot. One driver was caught travelling 105 km/h in the 30 zone, which is on a hill with restricted visibility.

Fines and other penalties in B.C. are based on how much over the speed limit a person is driving, among other factors including whether they were in a school or construction zone. Drivers with one or more ticket for excessive speeding pay a driver risk premium, which is based on convictions and reviewed in three-year periods.

Speed isn't the only thing Mounties are watching for on local roads. Earlier this month B.C. Highway Patrol said its CounterAttack impaired driving program kicked off with increased enforcement. RCMP detachments across the province will have their own enforcement plans to stop impaired driving through the holiday season.

"Poor decisions can have tragic consequences for you and others," said Chief Supt. Holly Turton, the officer in charge of B.C. Highway Patrol, in a news release.

"Please make alternate arrangements if you plan to consume anything that impairs your ability to drive."

Drivers are warned to expect more police road checks across the province in December and are asked to obey the direction of officers at all check stops.

Andre Leon Talley, the towering former creative director and editor at large of Vogue magazine, has died. He was 73.