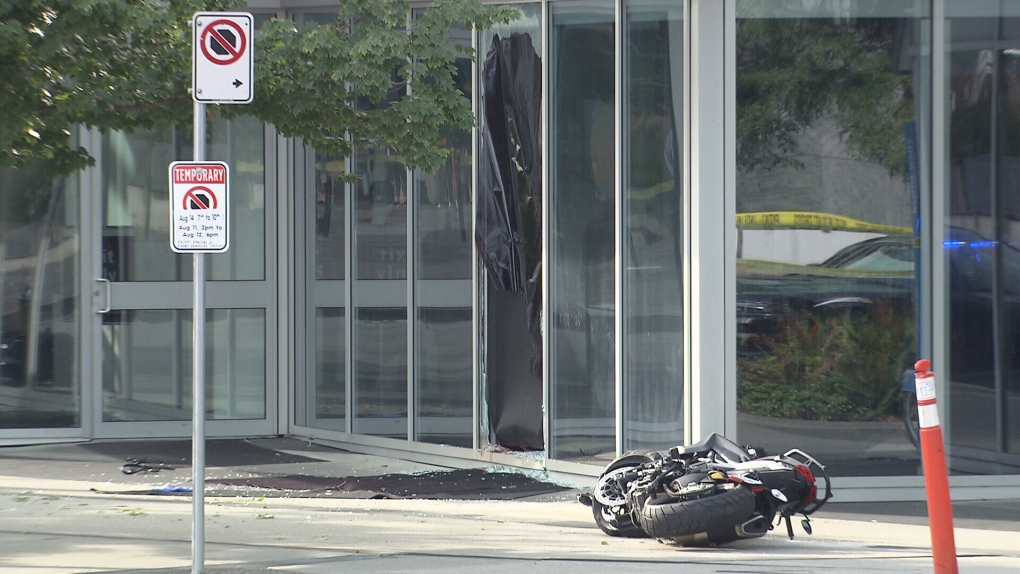 The scene of a fatal motorcycle accident on the downtown Vancouver set of 'Deadpool 2' is seen Aug. 14, 2017.

VANCOUVER -- WorkSafeBC has imposed nearly $300,000 in administrative penalties on a Vancouver film production company in relation to the death of a stunt performer on the set of Deadpool 2 in August 2017.

TCF Vancouver Productions Ltd. has been ordered to pay $289,562.63 for a variety of violations of British Columbia's workers' compensation and safety laws identified by WorkSafeBC.

Among those violations was failing to ensure that the stunt driver - professional motorcycle racer Joi Harris - was wearing a helmet when performing the stunt that led to her death.

WorkSafeBC's announcement of the fine also lists, as a separate violation, "instructing the stunt performer not to wear safety headgear while operating the motorcycle."

Harris was attempting a stunt at Jack Poole Plaza on Aug. 14, 2017, when something went horribly wrong. She somehow lost control of the bike, drove off set and crashed through a window across the street.

Harris was an accomplished motorcycle racer from Brooklyn, New York, and billed herself as the first African-American woman to ride in sanctioned road races. Deadpool 2 was her first film as a stunt performer, according to movie industry websites.

The primary purpose of the administrative penalty is "to motivate the employer receiving the penalty - and other employers - to comply with occupational health and safety requirements," according to WorkSafeBC.

The amount WorkSafeBC fines companies found to be breaking the rules is based on the size of a company's payroll, the nature of the violation and the company's history of violations.

Penalties can be larger for high-risk or intentional violations, or if the employer has been fined for the same violation in the last three years, WorkSafeBC said.