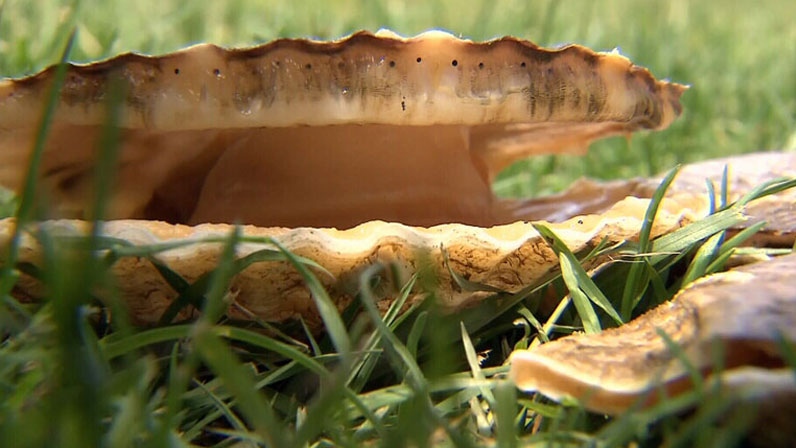 A scallop is seen in this undated file image. (CTV)

During his 21 years of raising shellfish larvae in water pumped out of the Georgia Strait, mortality levels would rear up periodically for reasons unbeknownst to the aquaculture farmer.

But nothing came close to matching his abysmal yield at Island Scallops Ltd. in 2010 when Saunders set out to grow 12 billion larvae and only seven million survived.

“I was tearing my hair out. I didn’t know what was going on,” he recalls.

“We had continuous failures in the hatchery… but never to this extent where batch after batch, spawn group after spawn group died.”

Saunders usually produces 40 to 50 million shellfish from a stock of less than one billion larvae, but attempted to raise significantly more that year because they kept dying.

Hunting for an explanation, he screened his hatchery for bacterial disease and was stumped when results came back normal.

He finally hit a break after reading a paper linking the death of a small mid-water fish to high concentrations of carbon dioxide in ocean water.

“It was the same thing we were seeing in our scallop larvae,” he says. “The fish didn’t swim very well, wouldn’t eat and died very easily.”

That’s when Saunders decided to artificially lower the carbon dioxide levels in the water used to raise his stock.

“It wasn’t until we actually started to degas the CO2 that we saw, it was miraculous, suddenly everything was living and growing,” he says.

Rising amounts of carbon dioxide in the waters in and around Baynes Sound, a channel regarded as the heart of British Columbia’s shellfish industry, have farmers like Saunders fearful about the future of their businesses.

“Basically, if you are harvesting shellfish with a shell, so clams, geoducks, urchins, scallops, muscles, then you should be worried,” Chris Harley reaffirms from his office at the University of British Columbia’s zoology department.

As an associate professor, Harley researches how creatures on the province’s coast are affected by ocean acidification – a term used to describe the continual decrease in the pH level of oceans worldwide that many scientists believe is caused by human emissions.

For shellfish, the resulting shift in ocean chemistry makes it a struggle for them to form their outer layer as a crucial ingredient to the process slips away.

“As you add carbon dioxide to seawater, the pH drops and carbonate ion availability goes down,” Harley explains.

“It’s just so energetically expensive to get those last few carbonate ions, or they just can’t find enough, that they can’t build their shells at the same rate they used to.”

In Saunders’s case, his larvae will perish when carbon dioxide levels are above 500 parts per million (ppm), although he says growing them below 400ppm is ideal. But lately, his work has been cut out for him as he is seeing water with concentrations as high as 750 and 800ppm.

While he can alter the pH levels of the water in the tanks and nursery where he raises larvae and juvenile-stage shellfish, he’s unnerved by his lack of control once the larger animals must be transferred into Baynes Sound.

“We can manage around the problem onshore, but of course in the ocean we can’t,” Saunders says.

Breeding out the problem

With his hands tied, Saunders rests his hopes on another option that could secure his livelihood.

Inside his hatchery, the longtime farmer works with the Department of Oceans and Fisheries on a project to find shellfish genetically predisposed to survive in more corrosive waters.

“Just as farmers bred drought-resistant corn, we need to breed a scallop and an oyster that can handle these high CO2s,” Saunders says.

Using genomic tools, his team aims to discover a signature associated with the shellfish that can withstand intensified carbon dioxide levels and then breed those ones to create a stronger stock.

But as Saunders waits on results from the first series of DNA tests, he admits his biggest fear is not accomplishing this goal.

“Like any farmer, you can’t handle a whole year class loss… it’s very, very tough to get through that. And if you have two year classes in a row where everything dies, you’re out of business,” he says.

Over the last two centuries, the carbon dioxide level on the surface of the global ocean has risen from 280 to 390 ppm, according to scientists like Ken Denman, a professor of ocean sciences at the University of Victoria.

He says the burning of fossil fuels during the past 150 years is to blame as the ocean absorbs roughly 30 per cent of the resulting carbon dioxide released into the atmosphere.

In another 100 years, Denman predicts the surface level could more than double.

“That’s scary. That’s really scary. But at the rate we’re going that’s about where we’re heading,” he says.

“It’s way outside of the evolutionary experience of all of these species that we care about, and so we’re not sure that they’re going to be able to evolve to cope with these changes,” he says.

“We’re getting past the levels of pH in the water… than anything has seen in the past 800,000 years. And in the next few decades we’ll be past anything that’s been witnessed in tens of millions of years.”

Why Saunders is getting levels well over 390 ppm, explains Harley, is due to the upwelling of deeper, more corrosive waters containing high concentrations of bacteria.

“It’s stewing down there, and when it comes back to the surface that’s when it’s really acidic,” Harley says.

While the upwelling itself is a natural phenomenon, Harley believes the pH of the rising water has been lowered further by human emissions.

“Even though that water formed somewhere out in the northern Pacific 50 years ago, there was already enough extra CO2 in the atmosphere to kind of crank it, crank that up in that water.

Contrary to the conclusions of Denman and Harley, Saunders doubts people are responsible for the declining pH. Instead he believes it’s coming from the deep ocean as it naturally degasses.

“We can disagree on where the CO2 comes from, but we all know the ocean is more acidic these days,” Saunders says.