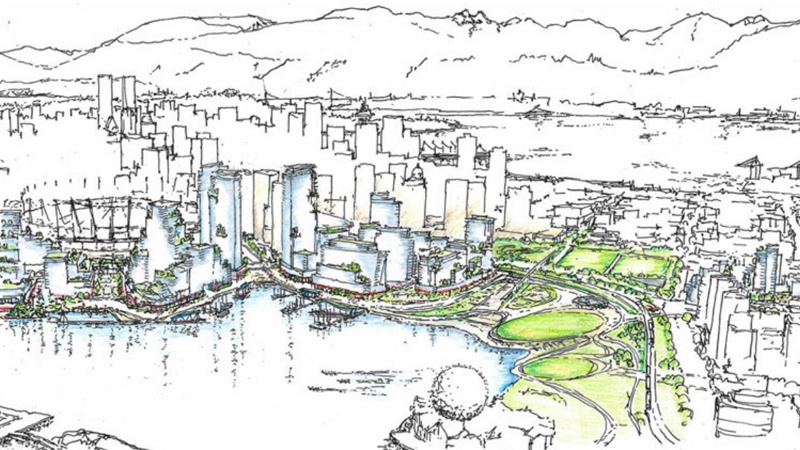 Plans for Northeast False Creek are seen in a perspective sketch included in a City of Vancouver report.

VANCOUVER -- The City of Vancouver says it's committed to working with the group spearheading the rejuvenation of the former heart of Vancouver's Black community, including on the "consideration" of a land trust.

"The meeting was intended to continue advancing foundational work on the implementation of the Hogan's Alley block, as well as to work collectively to address systemic anti-Black racism," a statement from the city says. "Staff recognize that the COVID response has delayed progress and are likewise eager to continue these discussions."

Stephanie Allen, a founder and board member of the Hogan's Alley Society, told CTV News last Friday that the group submitted a draft memorandum of understanding to the city more than two years ago and has still not received a response. She called that "egregious," especially since the city has moved other proposals forward and continued to work with other communities.

"We've had absolutely no work with our group on this land trust," she said.

"One of the key concepts outlined within the plan is the commitment to working with Hogan's Alley working group to establish the long-term involvement and investment of the Black community in the future life of this block, including consideration of a land trust," the city says.

But Allen said the city needs to be "unequivocal" in its commitment that the community land trust proposal will be adopted and it would be a "gross injustice" for it to contemplate selling any part of land it came to acquire through the displacement of Black residents.

Hogan's Alley was the former heart of Vancouver's Black community, but its residents were forcibly displaced with the construction of the Georgia and Dunsmuir viaducts in the 1960s. The neighbourhood was home to many Black-owned businesses, as well as the African Methodist Episcopal Fountain Chapel, which is now a private residence.

The city says it's proposing to bring an interim memorandum of understanding to council that would guide its partnership with the Hogan's Alley Society. The MOU would address anti-Black racism and cultural redress with the Black community, as well as the creation of a safe space for the celebration of Black culture as part of the implementation of the False Creek plan.

"The City recognizes that this is only the initial stage in building a relationship with the Hogan's Alley Society and the larger Black community, and see this work as crucial to the long-term success of the Hogan's Alley Block and any future agreement for their development," the city said.

Through community consultations, Allen says Black people were clear about wanting affordable housing, accessible public spaces, and inclusive cultural spaces in the region. The group has received some expressions of interest and support from other levels of government but has been left to "wait in limbo" by the city, Allen says.