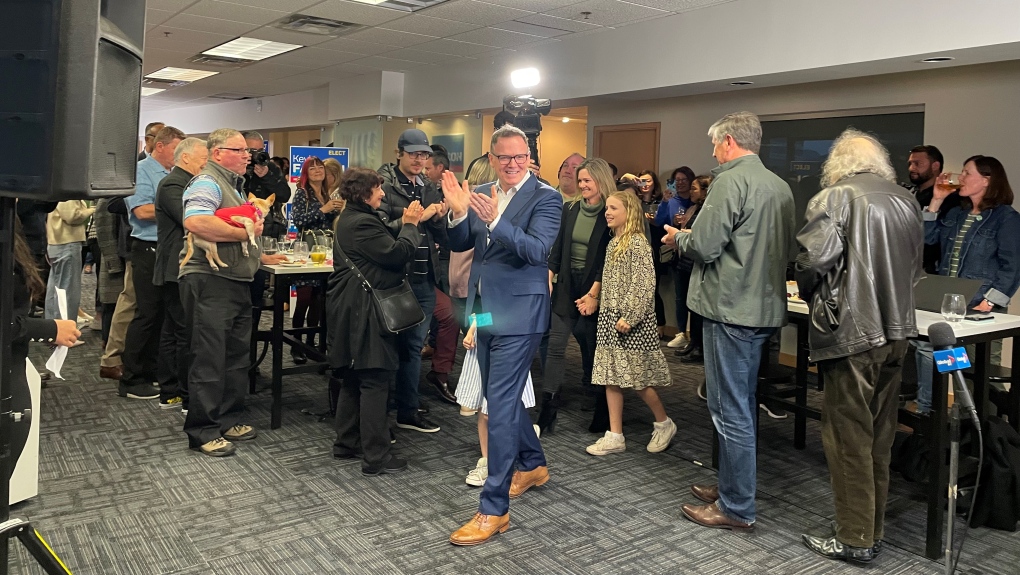 BC Liberal Leader enters to applause on the night of the Vancouver-Qulchena by-election.

The leader of the British Columbia Liberals says he will use his new seat in the legislature to look the NDP government leaders “straight in their eyes and ask tough questions.”

Kevin Falcon won the Vancouver-Quilchena byelection in a landslide Saturday with 6,200 votes - more than double the 2,590 ballots of his nearest challenger NDP candidate Jeanette Ashe, according to preliminary results.

The win was expected in the Liberal stronghold, which has been represented by two previous party leaders, Andrew Wilkinson and Gordon Campbell.

“Tonight we got a wonderful message from voters of Vancouver-Quilchena, that said it is time for the end of empty rhetoric, it is time for a government that gets results,” Falcon told a crowd of supporters at the party's headquarters in downtown Vancouver.

The former cabinet minister has not had a voice in the legislature since he won the party's leadership race in February.

He fills the seat left vacant by former Liberal leader Andrew Wilkinson, who won the riding in 2020 but resigned to make way for Falcon to sit in the legislature.

Falcon, 59, returns to politics after leaving a decade ago to spend more time with his young family and work in the private sector with a Vancouver investment and property development firm.

He held a number of portfolios in cabinet after first being elected in 2001 including transportation, health, finance and deputy premier. Falcon finished second in the 2011 leadership contest, losing to Christy Clark, who served as premier until the party lost power in 2017.

Falcon said in an interview that he has heard concerns from voters about housing and fuel prices, as well as a lack of access to family doctors.

“We've got people really struggling to make ends meet and this government has done nothing but raise taxes, increase spending, without getting results,” he said.

Ashe, a political scientist who is married to Vancouver Mayor Kennedy Stewart, congratulated Falcon on the win. She said she was proud of the NDP campaign and its focus on Falcon's record, which she said involved working in favour of the wealthy and well-connected.

Her campaign was not one of personal attacks but scrutiny of a former politician's record, she said.

“His record was one of deep and devastating cuts to health care, to housing, to education,” she said in an interview.

Also vying for the seat were Green candidate Wendy Hayko with 10 per cent, Conservative Dallas Brodie with seven per cent and Libertarian Sandra Filosof-Schipper with one per cent.

The results from Elections BC are not final, however Falcon said he expects to be in the legislature before the end of the current session.

His first order of business as the Official Opposition leader will be addressing gaps in rhetoric and promises delivered on topics like gas prices, housing costs, rental rates and taxes.

“I now have a seat in the legislature to hold the government to account looking straight in their eyes and asking them the tough questions, which I intend to do.”

Liberal politicians past and present said they looked forward to watching Falcon in the legislature.

Wilkinson, who failed to lead the party to victory in the 2020 election, said “hindsight is perfect” but he would only offer advice or lessons learned if asked.

He described Falcon as a “very credible, very thoughtful” candidate and said he fully supports the new leader.

Trevor Halford, MLA for Surrey-White Rock, said Shirley Bond has been a strong interim leader and he looks forward to watching Falcon transition to leader of the Official Opposition.

“Kevin is going to be asking some very direct and very hard questions because he's a guy that wants results. And we're going to be there to support them in that.”

Green leader Sonia Furstenau said she hopes to continue collaborating with the Liberal caucus on common ground, such as the all-party Health Committee to address the drug poisoning crisis.

This report by The Canadian Press was first published April 30, 2022.