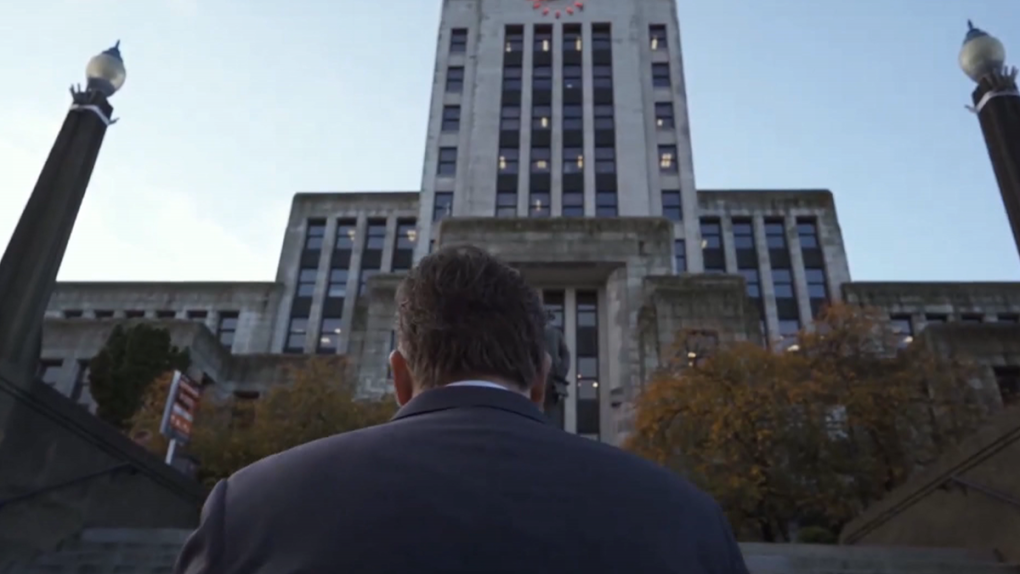 Vancouver Mayor Kennedy Stewart is seen in a still image from video released on Facebook Nov. 5, 2019.

VANCOUVER -- A plan by the City of Vancouver to gain Health Canada approval to decriminalize small amounts of illicit drugs has won support from the mayors of seven other British Columbia cities.

A statement signed by the mayors of Victoria, Saanich, Nanaimo, Kamloops, Burnaby, New Westminster and Port Coquitlam says they support the so-called Vancouver Model to eliminate criminal penalties for simple possession and they want the federal government to do the same.

The mayors say they are on the front lines of a worsening overdose crisis that is claiming the lives of thousands of people.

They urge Health Canada to approve what they call the “groundbreaking” approach, saying it will allow other municipalities to study decriminalization and understand it as a way to counter the overdose crisis.

Under the Vancouver Model, the city, police department and regional health authority worked together to set initial thresholds for 15 common illicit drugs and anyone found in possession of less than the threshold amount would not face criminal, financial or administrative penalties.

The mayors say the plan offers a health-focused approach to substance use, allowing users to avoid stigma and more easily seek help for addiction treatment or other services.

Vancouver submitted its final proposal to Health Canada on June 1, making it the first jurisdiction in the country to apply for such an exemption from federal drug laws.

The seven mayors say Vancouver is not alone in dealing with the severe impacts of the overdose crisis, especially when compounded by the challenges of the COVID-19 pandemic.

Data from the BC Coroners Service shows 680 people across the province died from toxic illicit drugs between Jan. 1 and April 30 this year.

Since January 2016, the overdose crisis has claimed the lives of almost 7,000 British Columbians, the mayors say.

This report by The Canadian Press was first published June 11, 2021.