Warning: This story contains references to an attempted suicide.

A mother from B.C.'s Lower Mainland is speaking out after her 11-year-old child was forced to wait 41 hours for an ambulance transfer following a heartbreaking suicide attempt.

CTV News is referring to the mother as Sarah and her child as Cameron, both pseudonyms to protect the young patient's identity.

Looking back on the family's experience days later, Sarah still struggles to understand how her child could have been kept waiting so long during a time of emotional and medical crisis.

"It's absolutely gut-wrenching," she said. "They were not getting any care, any counselling, anything. They were just sitting in a chair."

The family's harrowing story began in the early hours of last Thursday morning, when Cameron, who was staying at Sarah's ex-husband's place in Langley, attempted suicide using prescription drugs.

The panicked father rushed them to Langley Memorial Hospital, knowing the facility doesn't have an adolescent psychiatric unit but focused on avoiding the worst-case scenario of a serious overdose.

Cameron was assessed, treated, and put under a temporary mental health certification. The family said hospital staff initially estimated Cameron would be transferred to Surrey Memorial Hospital to see a psychiatrist sometime between midnight Thursday and 10 a.m. Friday.

Sarah's ex-husband stayed at the hospital that night while Sarah went home to Delta, hopeful to meet her child at Surrey Memorial the next morning so they could begin the separate but also vitally important mental health aspect of Cameron's treatment with a psychiatrist.

Instead, she woke up and was surprised to learn her child remained in Langley.

"They still hadn't moved but (staff) had kicked them out of the room they were in," Sarah said.

Cameron remained nauseated and disoriented, the parents said, but was placed in the waiting area of the adult psychiatric unit by staff who believed an ambulance – the only allowable method of transfer for a patient who is under certification – would be arriving soon.

Cameron would stay there for another full day and night before finally being transferred at 5 p.m. Saturday, exposed in the meantime to a stream of adult patients coming in and out in various states of mental distress.

"This 11-year-old kid, who's in a mental health crisis, is having to deal with screaming adults," Sarah said. "We're asking them repeatedly, who can we call? What can we do? And we were just told, 'Well, there's nothing we can do.'"

Situations like the one Cameron's family experienced are upsetting, but not unique, according the Ambulance Paramedics and Dispatchers of B.C.

Union president Troy Clifford said paramedics are keenly aware when the people they serve are left waiting in a prioritized queue, where they are at constant risk of being bumped down the line by an urgent life-or-death emergency.

"Paramedics really just want to do their job, they want to treat and transport people to hospital," Clifford said.

"These delays are horrible to see, and sadly, they're happening every day. Most of them aren't tragic outcomes, but these are people – relatives and family members – and when they're not getting an ambulance, it's hard to watch. I take it very personally."

Clifford said despite promises from the province to address critical staffing issues at the B.C. Ambulance Service, many problems remain.

There are about 4,500 paramedics and dispatchers across the province, and the union credited the government for converting hundreds of part-time positions to full-time to alleviate some of the pressure.

"But conservatively, we estimate we could use another 1,000 paramedics in the system to meet the demands we're seeing."

According to the union, there are still many nights when between 20 per cent and 50 per cent of ambulances sit empty in various communities – both urban and rural –because of inadequate staffing.

Clifford estimated about 40 per cent of ambulances in the Fraser Health region were out of service between Thursday and Saturday, while Sarah's family was repeatedly promised they would be cared for soon. 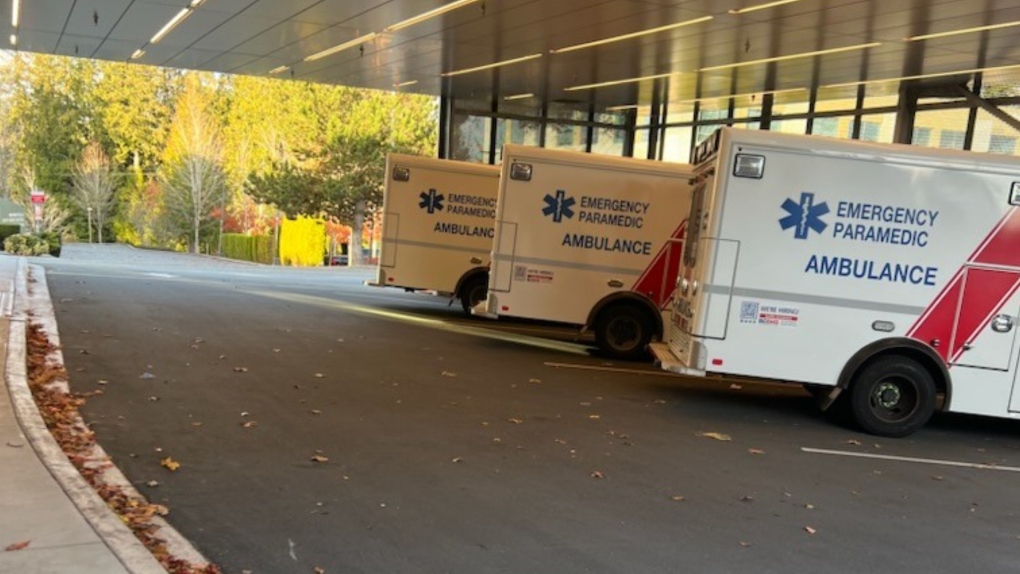 While stuck at Langley Memorial Hospital, the family noticed a line of three ambulances that were parked outside as they waited for a ride.

"When you want your kid to get transferred and you see all these empty ambulances, it's just kind of infuriating, right?" Sarah said.

24 PER CENT OF POSITIONS VACANT

Both Fraser Health and the Ministry of Health directed questions about the family's delayed transfer to B.C. Emergency Health Services, which said it is reviewing the circumstances of the incident.

"We do know that at the time, this patient was in stable condition, in hospital, and that our paramedics were responding to and transferring other patients with more urgent and potentially life-threatening conditions," a spokesperson said in an email, adding that "the first ambulance that became available was assigned."

BCEHS said it received the first request for an ambulance around 11 a.m. Friday, and that the patient was transferred approximately 30 hours later.

Officials noted there were 204 full-time paramedic jobs posted in September – the jobs Clifford said were used to replace existing part-time positions – along with 50 new backfill positions, and that annual BCEHS spending has increased to $559 million from $424 million over the last five years.

But the province acknowledged about 24 per cent of positions remain vacant.

The union cited several factors impacting recruitment, including competition with the private sector. Pipelines and other major infrastructure projects are required to have medics on site, and Clifford said those positions can be much more lucrative than working for the government.

"They all hire the same people we're trying to recruit," he said.

Potential future paramedics are the kind of people who might also consider a career in policing or firefighting, both of which Clifford said pay significantly more as well.

Sarah said she understands how strapped health-care resources are, and that every hospital employee they dealt with was kind and respectful. Staff encouraged the family to file an official complaint, which Sarah said they intend to do once they have had some time to breathe.

"They were nice," she said. "One of the nurses came back on a second shift and they saw my ex-husband still sitting there and they were shocked that we were still there."

As the hours dragged on in the waiting area of Langley's adult psychiatric unit, Cameron was also offered a bed, but declined – feeling too exposed and preferring to sleep beside their father on two chairs pushed together. Staff also gave the child Ativan when they began experiencing panic attacks.

Still, Sarah said it was agonizing watching her child wait for the care they urgently needed. And while the family begins their journey through ongoing treatment, Sarah wanted to share their story in the hopes that something might change, and others might be spared a similar experience.

"Is there not something that we can do here?"

If you or someone you know is in crisis, these are some resources that are available: