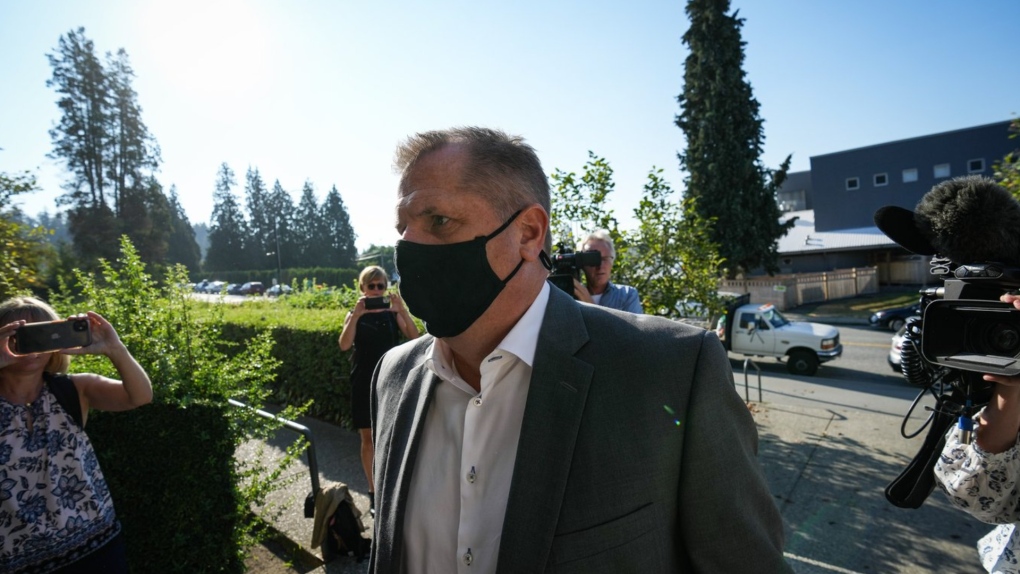 Former Vancouver Whitecaps and Canada U-20 women's soccer coach Bob Birarda arrives at provincial court for a sentencing hearing, in North Vancouver, B.C., on Friday, Sept. 2, 2022. Birarda, 55, pleaded guilty in February to three counts of sexual assault and one count of sexual touching for offences involving four different people between 1988 and 2008. THE CANADIAN PRESS/Darryl Dyck
Vancouver -

Judge Deanne Gaffar said Bob Birarda, a former Vancouver Whitecaps and Soccer Canada coach, violated the “sexual integrity” of the four players, three of whom were under 18 at the time of the offences, which occurred between 1988 and 2008.

Gaffar handed Birarda a sentence of two years less a day on Wednesday. He is to spend 15 months and 29 days in jail, while the remaining eight months of his sentence will served under a series of conditions, including a stint of house arrest.

The judge noted it's possible Birarda could be granted an earlier statutory release, after which he would go on to serve his conditional sentence.

Birarda, 55, who lives with his wife of 29 years, pleaded guilty in February to three counts of sexual assault and one count of sexual touching involving the teens.

His early guilty plea was a mitigating factor in his sentencing, while the underlying “power imbalance” in which Birarda's victims were forced to navigate his conduct was an aggravating element, Gaffar told the North Vancouver courtroom.

Each of the victims were talented and determined athletes who sought to play soccer at high levels before Birarda's offences, the judge said Wednesday.

The former coach was in a position of trust with the victims, who feared that rejecting his interest in them would harm their soccer careers, Gaffar said.

Birarda previously read an apology to the victims and all others he said he has let down, including his family, saying there is no excuse or justification for his actions.

He told his sentencing hearing earlier this fall that he was filled with the “deepest shame” for the sex offences, which ranged from having sex with a player while he was her coach in his early 20s, to pursuing a 17-year-old player when he was 40.

In the latter case, Gaffar said the girl attended Birarda's soccer academy between the ages of 11 and 14, and by 2007, the 17-year-old had been selected as a prospect for the Vancouver Whitecaps' women's team where he was coaching.

It was around that time that Birarda's communication with her “devolved,” the judge said, into a pattern similar to his previous offences. He sent messages telling the girl she had put a “spell” on him, and she was “making” him fall in love with her.

The woman quit soccer on her 18th birthday, Gaffar said.

Birarda's lawyer Bill Smart had argued for an eight-month jail sentence, while the Crown had recommended the sentence of two years less a day.

Gaffar followed the Crown's suggestion for the harsher sentence, saying Birarda's victims have experienced anxiety, self-doubt and in some cases depression into adulthood, and his behaviour has affected their ability to trust others.

Birarda put his head in his hands briefly as the judge described the impacts of his behaviour on one of the victims, saying the woman indicated “she fears him.”

There were also significant mitigating circumstances, Gaffar said, including Birarda's early guilty plea, which meant the victims did not have to relive their experiences while testifying, and his demonstration of “profound personal guilt.”

Birarda has received counselling to deal with the “disgust and remorse” he feels over his conduct, said Gaffar, adding she accepts the conclusions of two psychological assessments that found he was at a low risk of reoffending.

Growing up, Birarda experienced family violence perpetrated by his father and witnessed his mother and siblings experiencing the same, Gaffar noted.

Birarda was sexually abused by a family member when he was 10 or 11 years old, and later by an older swimmer when he was swimming competitively, she said.

From 2008 to 2019, he experienced intermittent thoughts of suicide, and in 2019, he was admitted to hospital for several days due to suicidal ideation.

Gaffar noted the case has garnered public attention and the stigma of the offences can be seen as a form of punishment, in addition to a prison sentence.

The judge said Birarda's lawyerhad argued that a recent Supreme Court of Canada decision requiring increased sentences for sexual offences against children and youth doesn't deal with historical offences, and Birarda faced more stringent consequences today than he would have at the time of the incidents.

But Gaffar did not accept that argument in determining Birarda's sentence, saying the high court's decision does apply and represents a “clarion call” to properly reflect the gravity of such offences and the moral culpability of the offender.

There has been a societal shift in how sexual assault is viewed in the years since Birarda's offences, she said, and the high court decision reflects a more modern understanding that requires greater attention to psychological consequences.

Once released from jail, Birarda will spend four months on house arrest, then four months under a curfew of 8 p.m. to 6 a.m., followed by three years' probation.

Other conditions include having no contact with the four victims, and he is not allowed to be around any female under the age of 18, with a handful of specific exceptions.

The conditions did not include an outright ban on coaching.

Rather, he is not allowed to engage in any coaching or volunteer opportunities involving females under 18 without advanced written permission.

Birarda was handcuffed and led out of the courtroom after the judge finished outlining the conditions of his sentence.

Gaffar said another date must be set for his defence lawyer and the Crown to address if he will be included on the sexual offender information registry.

This report by The Canadian Press was first published Nov. 2, 2022.