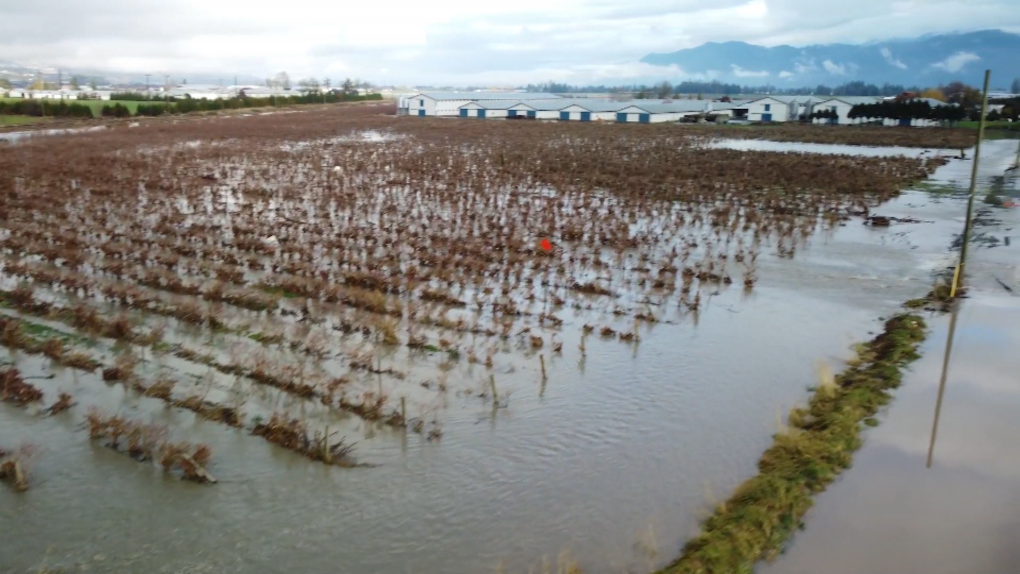 Flooding in Sumas Prairie is seen on Nov. 29, 2021, as farmers grapple with more water flowing in from Washington state.

Police in Abbotsford are thanking residents of the flood-ravaged Sumas Prairie for their help in the arrest of two men allegedly caught attempting to steal equipment from a farm in the area.

The incident happened around 3:45 p.m. Wednesday at a farm in the 2900 block of Tolmie Road, according to a news release from the Abbotsford Police Department. The area is near the eastern end of Sumas Prairie, between No. 5 Road and Campbell Road.

According to police, a farmer in the area noticed two suspicious men trying to steal from the property. When noticed, the men fled on foot, leaving their vehicle behind, police said, adding that the vehicle had been reported stolen.

Officers were already patrolling the Sumas Prairie as the area works to recover from last month's devastating floods. They arrived at the scene soon after the men fled, and additional officers and police dogs were also dispatched, Abbotsford police said.

"During this time, farmers in the area provided vital information to police call takers that assisted responding officers," police said in their release.

"Containment of the area was quickly established and, with the assistance of (police dogs), the two males were taken into custody without injury."

Patrick Schryver and Kusone Robinson have each been charged with theft under $5,000 as a result of the incident, and Schryver has also been charged with possession of stolen property, police said. They added that both men are known to police.

Some Sumas Prairie residents were under evacuation orders for nearly a month, after an atmospheric river brought days of heavy rain in mid-November and caused the Nooksack River in the U.S. to overflow its banks and drain north into the Fraser River.

When they returned to their homes and businesses, some found that thieves had visited their properties and taken valuables that survived the floods.

Abbotsford police said in their statement Thursday that maintaining the safety and security of prairie residents is "a top priority."

"Members of the AbbyPD Crime Reduction Unit, along with our front-line officers, are out patrolling and making every effort to hold those involved in property crime offences responsible," police said. "AbbyPD is reminding residents to report any suspicious activity to police and to be mindful of not only your property, but your neighbours’ as well."