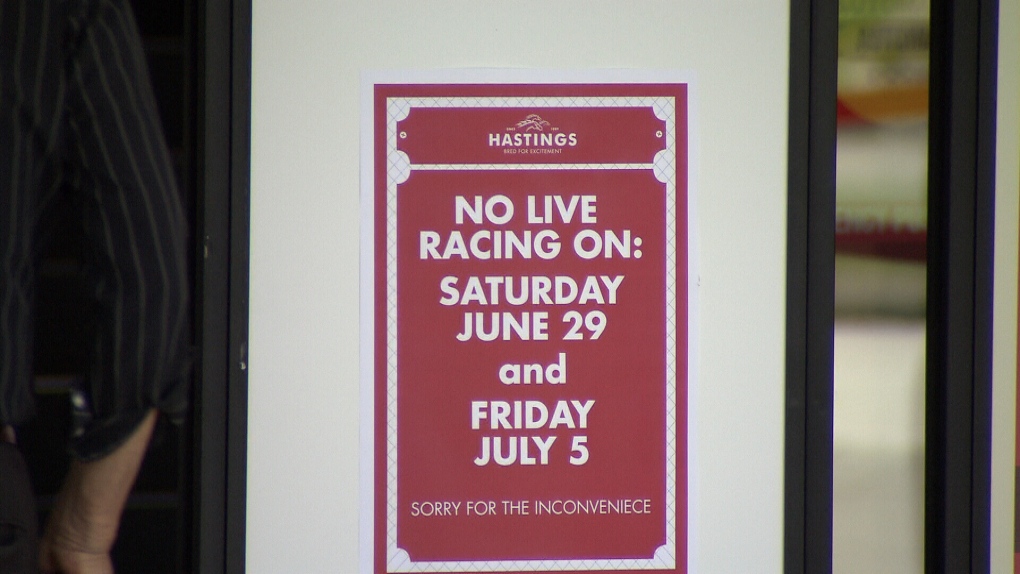 Hastings Racecourse owners say a decline in the number of available horses has forced them to cancel two days of races. June 29, 2013. (CTV)

A shortage of horses has forced a popular Vancouver track to cancel days of races – and it’s a problem owners say is plaguing more than just Hastings Racecourse.

A sunny Saturday on a long weekend typically translates to big business for the track, but a lack of thoroughbred race horses has forced Hastings Racecourse to close its gates for the day Saturday as well as the following Friday.

A reduction in the number of horses being bred combined with the fact that fewer people are placing bets has led to some hard times for the once-thriving industry, according to Howard Blank, vice-president of communications and entertainment for Great Canadian Gaming, which owns the racecourse.

“When you have both of [those], obviously, there is a financial implication there,” he said. “I can’t remember any time in our history of ownership and prior of having to cancel, so obviously it’s not a very common occurrence.”

Horse racing parks across the continent face the same problem, Blank said. A decline in the number of racing horses directly affects the businesses’ bottom line.

“We understand this is prevalent pretty well across the board in western Canada and the United States and in the Eastern seaboard,” he said.

“The good news is by cancelling the races those horses that we did have are now being grouped in with more horses, so for the bettor, there’s more options and obviously bigger wins, places and show bets.”

Northlands Park in Edmonton is also dealing with the horse shortage, which spokesman Chris Roberts said has been a long-term development rather than one that shot out of the gate.

“This is one of those problems that it didn’t happen in one year, it happened over a course of ten years,” he said. “You’re seeing fewer and fewer horses bred all the time and there’s lots and lots of reasons for that.”

Ultimately, that will lead to fewer racing dates and fewer tracks overall, he said.

Hastings Racecourse is still holding races Sunday and Canada Day Monday, but the track won’t rule out more cancellations in the future, according to Blank.

With a report from CTV British Columbia’s Scott Roberts