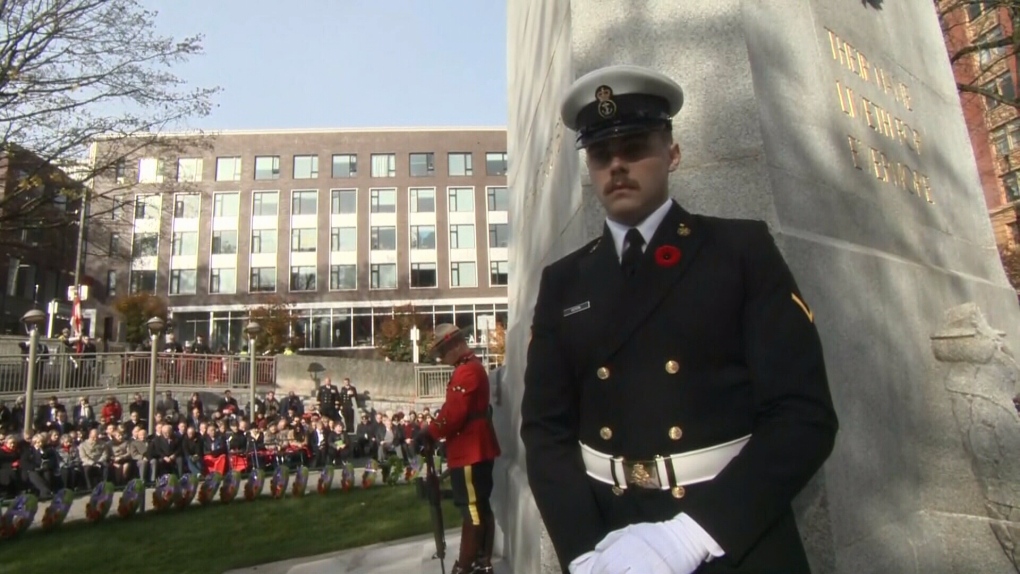 VANCOUVER – Canadians from coast to coast will take a moment on Monday to remember those who have served the country in times of war and peace.

In the Lower Mainland, dozens of Remembrance Day ceremonies are scheduled to honour the 2.3 million Canadians who have served. For those unable to attend a ceremony in person, CTV News Vancouver will air a Remembrance Day special from 10:30 to 11:30 a.m.

Here are some of the celebrations taking place on Nov. 11:

10:40 a.m. – A parade begins at McGill Library parking lot at 4595 Albert St. and ends at Confederation Park. A ceremony will be hosted at the cenotaph beginning at 11 a.m.

10:15 a.m. – A separate parade beginning at the fire hall on Marlborough Avenue will lead a group to Bonsor Park, where a ceremony will follow starting at 11 a.m. at the cenotaph at the corner of Nelson Avenue and Imperial Street.

10 a.m. – A service will start at 10 a.m. at Evergreen Hall, procession begins at 10:30 a.m. from Evergreen Hall with the ceremony immediately following at the Cenotaph outside the Chilliwack Museum (45820 Spadina Ave.)

10:30 a.m. – A parade leaving from the Maple Ridge Legion into the downtown area will be held before an 11 a.m. ceremony at the cenotaph at Memorial Peace Park. The ceremony includes a reading of names of soldiers from the community who have died in wars, a blessing and a lowering of the flags.

10:15 a.m. – A parade will begin at Old Windebank School on Stave Lake Street and march to Clarke Theatre for 10:40 a.m. There will be a service of remembrance at 11 a.m. Following the service, a wreath laying ceremony will take place at Legion Branch #57 - 32627 Logan Ave. and a social gathering will take place in the legion's lounge afterwards.

10:30 a.m. – An outdoor service will be held at the cenotaph located in front of city hall.

10:30 a.m. – A ceremony and service will be held at the Victoria Park Cenotaph at Keith Road and Lonsdale Avenue. The 2019 service will mark the 75th anniversary of D-Day and the Battle of Normandy.

10:45 a.m. – Remembrance Day events in Pitt Meadows begin with a procession and ends with a reception at the Pitt Meadows Family Recreation Centre following the ceremony. The ceremony takes place at the cenotaph in Spirit Square at 12007 Harris Rd.

9:30 a.m. – The Wilson Centre will host an indoor service, which will be followed by a parade to the service at the cenotaph in Veterans Park, which begins at 10:55 a.m. outdoors.

9:30 a.m. – An inter-faith and non-denominational service will be held at the Kyle Centre, followed by a parade at 10:30 a.m. to the arts centre where a ceremony will be hosted including a cannon salute.

10:20 a.m.– A military parade will march to the official ceremony at Richmond City Hall. The event includes two minutes of silence, wreath-laying and a free public reception. Those unable to attend in person can watch a livestream of the event on the city's website.

10:45 a.m. – There are several Remembrance Day ceremonies planned throughout Surrey, but a city-run, family-friendly event will be held at the Surrey Centre Cemetery. The ceremony starts at 10:45, with the family event running until 2 p.m.

10 a.m. – A ceremony and parade will be held in downtown Vancouver, beginning at the cenotaph at Victory Square on West Hastings and Cambie streets. This ceremony is the oldest continuing annual ceremony in Vancouver. It began in 1924 and reflects respect and remembrance of sacrifices in the service of our country – past and present.

11 a.m. – Mountain View Cemetery is hosting a day of remembrance and music at its Celebration Hall.

10:45 a.m.– A public service will be held at the Memorial Arch in Memorial Park, located on Marine Drive between 19th and 20th streets.

10:30 a.m. – After a silent sentry and colour party parade, a service will be held at the Whistler Cenotaph in Olympic Plaza. The service includes a children's poetry reading, wreath presentation, helicopter fly over and moment of silence. A community reception will follow.