A letter from a West Vancouver doctor soliciting donations to help fund his pending retirement is raising eyebrows in the community.

In his letter, bone density specialist Dr. Myron MacDonald informs patients he's giving up his practice because of a worsening neurological condition, but has little money to support himself.

The 74-year-old doctor, who has been working in the city for nearly half a century, partly blames his financial situation on his decision to run a low-volume practice and spend more time with each of his patients.

"At the end of the day I did not make much money, there is no pension, and I have limited savings," his letter reads.

"Ironically most of my patients followed my advice and got better, which further reduced my income. Doesn't that take the cake!"

MacDonald billed B.C.'s Medical Services Plan nearly $164,000 last year, but said there was little left after he covered his expenses. He suggests his patients could charge $20 or $30 a month on their credit card to help him through retirement.

The letter was an unpleasant surprise to some of his longtime patients, including Andy Anderson, a senior who comes to see the doctor about once a month.

"I think that was wrong," Anderson said. "It's against all medical ethics."

It wasn't the first time MacDonald has tried to solicit money from patients; years ago he asked for a $200 annual fee to cover the cost of uninsured services, including forms, missed appointments, telephone advice and physical exams.

Anderson said he's donated to the doctor before, when he could better afford it, but he won't be paying anything this time.

But apart from the latest letter, Anderson said he's always been pleased with MacDonald as a doctor, describing him as someone who would go "the extra mile" to care for his patients.

"He was very, very kind. He never rushed you in or rushed you out," Anderson said. "I've got no complaints about him as a doctor." 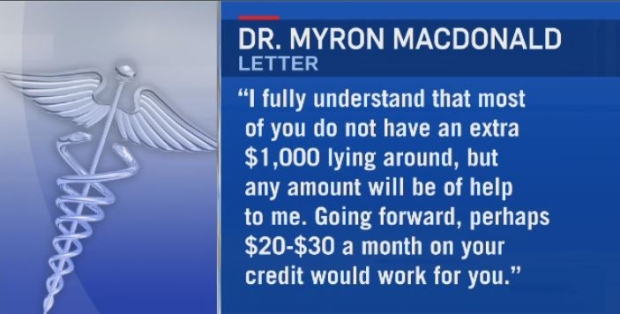 CTV News reached out to MacDonald's office Tuesday but did not hear back. The doctor elaborated more on his decision to retire, and on his financial situation, in his letter.

MacDonald, who was a founding member of Greenpeace in the 1970s, said he suffers from a condition that, while painless, has "robbed [him] of [his] legs" and will likely put him a wheelchair soon. He said he also wants to retire so he can see more of his granddaughter, who was born earlier this year.

"I must spend time with her and since I am about to turn 75 there cannot be many years left in me," his letter reads.

Before getting to his plea for donations, MacDonald promises to continue nagging his patients to look after themselves, and offers to help them find a new physician through his office before he retires at the end of the year.

He decries the state of the medical profession, where "to make a decent living… you have to see a lot of people every day so today's young doctors are opting for the high volume clinics. This is truly sad."

No one will be taking over MacDonald's practice after he leaves, according to the letter.

B.C.’s College of Physicians and Surgeons, which handles complaints against doctors, declined an interview Tuesday but issued a statement saying the matter is being resolved and MacDonald won't be accepting any potential donations.

"Any physician who requests money from patients to support him or her in retirement would be contravening a foundational principle which every physician is required to abide by: do not exploit patients for personal advantage," the college said in an email.

With a report from CTV Vancouver’s Shannon Paterson