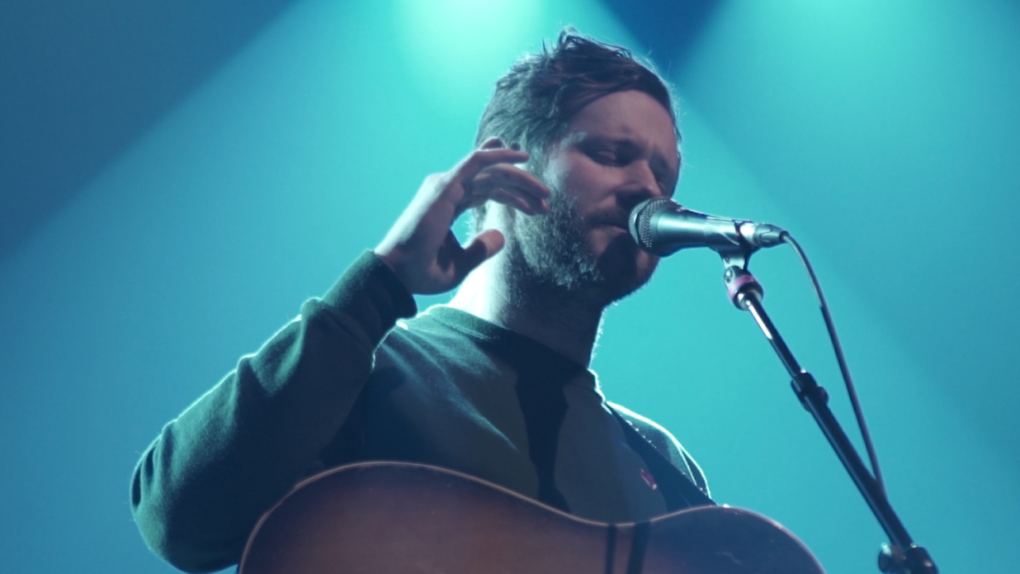 Dan Mangan plays his "Show to Nobody" at the Danforth Music Hall on March 13, 2020. (Submitted)

VANCOUVER -- Once gatherings of 250 people were banned in Toronto over growing concerns of COVID-19, Dan Mangan knew his upcoming show was in trouble.

The B.C.-based musician had just started his six-week tour across Canada and the U.S. to celebrate the 10th anniversary of his second album's release. On March 12, he and his band played a show at the Danforth Music Hall, which was supposed to kick off the tour.

"We were touch-and-go hour by hour with the city, figuring out if it was safe," Mangan told CTV News Vancouver, adding that there wasn't a ban on events from health officials at the time.

"We did the show and it was utter magic. It was like a weird last hurrah because everybody knew that we weren't going to be doing much of this for a while. It was a really special night."

By the next morning, restrictions on gatherings were put in place and the band's second Toronto show had to be cancelled.

"It was a really bummer day, it was a stressful day, we were trying to postpone all our shows," Mangan said.

The band was back at the music hall, beginning to pack up, when drummer Don Kerr said they should play and film the set anyways – just without a live audience.

"It all happened so fast," Mangan said. "At the time it was weird … we didn't have this sort of triumphant 'yay we did it' kind of feeling."

The show was edited over the weekend and released Monday night. Mangan said at one point, over 1,000 people were watching the stream at the same time and participating in a lively chat.

"I underestimated just how moving it was going to be to watch it a few days later with everybody else," Mangan said. "The resounding message from so many people was like, 'I needed this.'"

Mangan isn't the only Vancouver-based artist who is choosing to share performances to a virtual audience during the novel coronavirus pandemic, which has escalated to bans on gatherings of more than 50 people in many Canadian cities. Last weekend, local improv group Sunday Service chose to release a live clip of a performance on YouTube that was filmed without an audience at the Fox Cabaret.

"In our 15 years we've never cancelled a show," the group said on Twitter. "And we still won't. You're just not invited to be in the room while we do it."

By Thursday afternoon, the show had over 2,600 views online.

As well, Jokes Please, which runs a weekly comedy night out of the Little Mountain Gallery in East Vancouver, is planning to stream its Thursday night show online.

And it's not just Vancouver artists streaming shows. Earlier this week, Coldplay's Chris Martin launched the #TogetherAtHome movement, with many musicians playing from their living rooms. John Legend, Keith Urban, P!nk and Jann Arden are among the artists who have done mini virtual performances.

"I was supposed to be playing tonight and I just thought it would be nice to be able to play anyway," Urban said during his livestream. "Even though we can't be in front of all you guys tonight, I want to be able to play some songs and bring a little bit of entertainment into your screens."

For Mangan, the experience of playing without an audience was a weird one.

"It was sort of like a really ecstatic sound check," he said.

But the virtual audience of his "Show to Nobody" has been extremely supportive, he added, even donating money that will be distributed to the crew and band members who will be out of work in the coming weeks.

"This is a weird, scary moment for me too and this has sort of lifted my heart knowing that there's been all this connection," he said. "I'm just very grateful for this weird silver lining … the outpouring of love and gratitude from other people, it's really astounding."

For other artists out there, Mangan says this is the time to "hunker down," even though so many have seen months of work get suddenly cut as efforts to curb COVID-19 have heightened.

"My thought to the world is let's use this intensity to fuel some art that is innovative, creative and honest and unlocks little hidden truths about our situation," Mangan said.

"Out of this whole thing I hope that there is some piece of art … that helps to align the communal hive mind into something that is a kinder and more empathetic society."