Was Elisa Lam murdered or the victim of a strange accident?

Police investigators in Los Angeles are trying to determine whether a missing Vancouver woman found dead inside a water tank was met with foul play or the victim of a bizarre accident.

The search for 21-year-old University of British Columbia student Elisa Lam came to a tragic end Tuesday when the young woman’s body was found in a water tank atop the roof of The Cecil Hotel, near a notorious neighbourhood dubbed Skid Row, where drug use and homelessness are rampant.

The young woman was identified by markings on her body, police said, and a coroner’s inquiry will determine the official cause of death in coming days.

Lam travelled by herself to California four days before her disappearance on Jan. 31. She phoned her family every day until she disappeared without a trace.

Her body was found by a hotel maintenance worker around 10 a.m. Tuesday who was checking the water tank after complaints about low water pressure.  The tank supplies sink and shower water to the hotel rooms.

LAPD spokesperson Officer Sara Faden said the circumstances of Lam’s death are highly unusual and investigators are now trying to determine whether Lam was murdered or if "a very, very strange accident" occurred.

Videotape released by police after Lam’s disappearance showed the young woman acting strangely in the hotel elevator the night she was last seen by hotel staff.

The two-minute security tape footage showed Lam pressing buttons for multiple floors in the elevator before she darts out quickly, looking side-to-side before moving her arms around wildly.

“It’s not clear how she would have gained access to the roof by herself. Had she done so, the tanks themselves are not locked,” reporter Tom Walters told CTV’s Canada AM Wednesday.

It’s a tight spot between the water tanks and it took many hours to remove the body, said Capt. Jaime Moore of the Los Angeles Fire Department.

“Firefighters used their specialized tools to be able to cut the sides of the tank, remove the metal so they could carefully remove the body so the coroner’s office can continue its investigation,” Moore said.

Lam’s family first contacted the RCMP about their missing daughter, and the Canadian force contacted the L.A. Police Department. While there are about 3,200 missing person cases in L.A. every year, police there handled Lam's case differently because it’s an international case.

The missing student’s parents and sister flew to Los Angeles to attend a press conference about her disappearance on Feb. 6, but haven’t spoken publically.

The reason Lam went to California is unclear, but authorities say Lam intended to travel to Santa Cruz as her final destination, which is about 563 kilometres north of Los Angeles.

A timeline of Elisa Lam’s death: 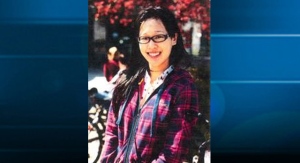 The Mysterious Death of Elisa Lam