A body found on the roof of a downtown Los Angeles hotel has been identified as missing Vancouverite Elisa Lam.

The 21-year-old University of British Columbia student went missing on January 31, and was last seen at the Cecil Hotel, near the city's notorious skid row.

On Tuesday, Lam’s body was discovered in one of the hotel’s four water tanks by a maintenance worker after investigating complaints about low water pressure, according to the Los Angeles Times.

Videotape released by police after Lam’s disappearance showed the young woman acting strangely in the hotel elevator the night she was last seen.

The two-minute security tape footage showed Lam pressing buttons for multiple floors in the elevator before she darts out quickly, looking side-to-side before moving her arms around wildly.

Her reason for going to California is unclear, but authorities say Lam intended to travel to Santa Cruz as her final destination, which is about 563 kilometres north of Los Angeles.

Investigators say Lam was in daily contact with her family in Vancouver until she vanished. She never checked out of the hotel.

The last people to see Lam, a hostess and desk clerk at the hotel, said they never saw her with anyone else. 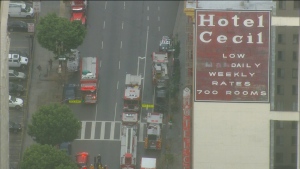