Voting during pandemic no riskier than grocery trip or coffee run, experts say

VANCOUVER -- While John Horgan's decision to call a snap election during the COVID-19 pandemic has been slammed as cynical and opportunistic, experts say B.C. residents should consider voting no riskier than grocery shopping.

More than 474,000 people have already requested mail-in ballots, and the BC Liberals are running attack ads focussing on the NDP’s “risky pandemic election,” so CTV News has compared voting procedures and policies across jurisdictions and consulted with experts who agree: the risk of in-person voting is low with the measures already put in place by Elections BC.

You and your family shouldn't feel unsafe walking down the street or visiting your neighborhood parks. But under the NDP, permanent tent cities have been encouraged — and that's unacceptable. We need to provide a pathway to recovery for those who need our support the most.#bcpoli pic.twitter.com/Tox3Ys7n4J

“The very basic things that you can do in public, in a grocery store are proven to be very effective,” Gustafson said. “There’s been a lot of conversation with elections officials to makes sure voting is safe. The things that we need to do to keep safe are quite simple. We’ve spent a lot of time focussing on these casual contacts we have with individuals, but the vast majority of COVID-19 is transmitted in very close quarters.”

Update: we have now received about 474,000 requests for vote-by-mail packages in the 2020 Provincial Election. This number will be updated daily (Mon-Fri) on our website here: https://t.co/0ihiPxkbi8 https://t.co/fAbmOuMw0D

In New Brunswick, a snap election was called in late August and voters headed to the polls on Sept. 14. At the time, the province’s chief electoral officer made a similar comparison to shopping. With a full two-week incubation period now past, the province has not seen a surge in cases since Election Day.

“For most voters, they’ll be in and out of a voting place in five or 10 minutes at the most,” said Elections BC spokesperson Andy Watson. “We consider it to be safe, we are confident the measures that we have in place (after) the consultations we’ve done with the provincial health officer. I think it’ll be a very different election in terms of what we’ve had in B.C. in the past, but the sorts of things we’ll be doing to ensure safe voting in person are things a lot of people will be familiar with at this stage of the pandemic — physical distancing, protective equipment, barriers, things like that.”

He says masks are encouraged and people are welcome to bring their own pencil or pen, but that plenty of hand sanitizer will be available and any lineups will see voters spaced out, likely outside.

American health officials are grappling with similar issues of trust and confidence around in-person voting ahead of their presidential election in November. A group of respected epidemiologists, including bioethicist and former Obama administration health adviser Dr. Zeke Emanuel, developed a chart for people to visualize their risk of contracting COVID-19 based on four main factors: enclosed space, duration of interactions, crowds, and forceful exhalation (“sneezing, yelling, singing and coughing”). 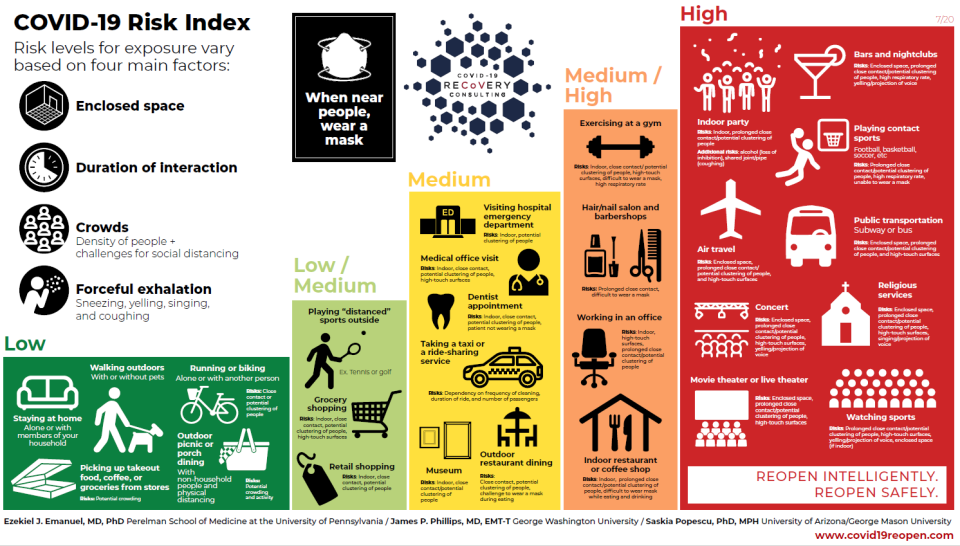 Picking up takeout food or walking outside is low-risk, while grocery or retail shopping is in the low- or medium-risk category, and Emanuel told The Atlantic the message around voting and its potential risks should change with all the information scientists have learned about the virus since spring.

So while frustration at layering policy considerations and campaign promises on top of work and childcare and the myriad other things people are juggling on top of a pandemic is fair and warranted, the health risks of British Columbians going to the polls on Election Day are low.​